For three seasons, Jonathan Vilma was the brains and the braun in the middle of some great University of Miami defenses. Now, 28, and a two-time Pro Bowler, Vilma is a Super Bowl champion and role model for up-and-coming football players in his native Miami-Dade County.

This afternoon I got a chance to catch up with the 6-1, 230-pound former Coral Gables High star, who still lives in South Florida not far from his parents during the off-season. We got a chance to talk about the Canes, his favorite Randy Shannon story, his own relief efforts in Haiti and how the Saints plan to wear the bulls-eye on their backs this coming season. Enjoy. Q: What have you been up to since the Super Bowl? Has your life changed much since you added Super Bowl champion to the resume?
Vilma: "Life has changed for the better. It was a real fun ride when we won it. That first month, the rest of February and March, we pretty much celebrated. It's been a little down since. Now, it's about getting ready to do it again. In the off-season programs, I could tell we were real focused in. We had about 95 percent attendance. Everybody was fired up, ready to go."

Q: How much is Haiti still on your mind?
Vilma: "It's still very much on my mind. I'm planning a trip down there during my bye week in November. I hope to get some of my teammates to come down there with me to help build some schools and help rebuild. They still very much need our help."

Q: A few players at UM told me Wednesday you've been out there during workouts this summer trying to deliver a strong message to them about team unity. Have you felt the need to be a little more vocal than usual with them this year?
Vilma: "No. I guess I'm just really excited with what I saw and have been seeing from them. The group they have out there looks really good. They look like tough guys. I thought they were playing real good ball last year. Not the last game against Wisconsin. But I feel like they're real close to where they need to be. I think if I was speaking a little bit more, it's me being excited." 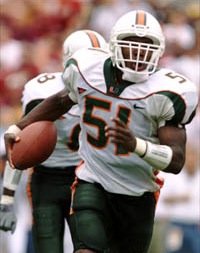 Q: You played on some of the most talented UM teams ever. How close do you think this year's Canes team is to winning another national title? Or, are they still missing something?
Vilma: "I think if they're missing anything it's that they need a little experience. Nobody on this team has won an ACC title or a national title. It's all going to be new to them. Once they hit the 6-0 mark, 7-0 mark, that will be new to them. I think they have all the talent in the world. It's entering the new territory, when you become the hunted. How will they react to having real success?"

Q: Is it just me or does it seem like a lot of those young guys who came in that special recruiting class of 2008 have really become more vocal?
Vilma: "No. I noticed the same thing. I have found a lot of guys wanting to take that role. Guys who were freshman who didn't know the ropes have grown up. You see guys like Jacory [Harris], a QB, a natural leader, really stepping up even more. [Sean] Spence, Colin [McCarthy] are sending the right messages. I've been there with the 6:30 group with [trainer Andrew] Swasey. I see those guys, the linebackers, trying to run with the DBs, pushing themselves to be even better. All they talk about is wanting to win. I'm real excited to see what they can do especially against Ohio State."

Q: Can you share your best Randy Shannon story?
Vilma: "I've known Randy for so long. He had me when I was a puppy. One of the best stories I have with him is when he let me stand out on my own as a football player. We were going up to face Tennessee. He had so much confidence in me and the defense he actually let me call the defense the first two series. We went three and out twice. It was exciting for me. I thought he was joking at first when he told me, but he was dead serious. I think he wanted to prove to me and to everyone on our defense it doesn't matter what you call. As long as you hit people hard, do the things you're supposed to, you can be great."

Q: He coached you as a coordinator. How do you think he's done as a head coach?
Vilma: "Right now where the program is heading is great. I think at first, he had to battle two things. One, was the pressure of winning. The other was getting the program the way he wanted it to be. Sometimes you have to take a step back before you can move forward. He had to get out the bad apples and keep the guys who were the team players. Now, you see the program turning around. You see guys who care about wanting to win. I think all of that is because he has a grand scheme. He's won national championships and he knows what it takes. He's trying to get us back there."

Q: I've had players in the past tell me how he has 'eyes everywhere.' They've said how he'll go into meetings and tell guys, 'I know you didn't make it back in last until 1 a.m. I heard you were here or there.' Was he like that when you were here?
Vilma: "[Laughter] Yes. I don't know how he knows the things he knows. He's always been well connected. All I know is he really cares about his players as individuals. He wants them to grow up as men, be good people. And it's not just when you play for him. It's after to. The way we talk to each other now is different. The conversations are more about life. It's great. He cares about you for life." Q: How different is the defense John Lovett is running now at UM from what you did with Randy?
A: "Not much different. I like the defense actually, a lot. To me, [Lovett] understands the college game. I think he understands how to put players in the best position to make plays. It's probably the best thing you can do. I think the deal with the players is they need to have a good understanding of it. I think they're coming along. Having him for two years will make a big difference."

Q: Do you talk to any of the current Canes players often?
Vilma: "I text them all the time. I've always told them the only thing you're going to get from me is the truth. If they played well, I'll tell them they did their job. If they don't, I tell them they didn't get it done. For me, it's really about doing whatever I can to help them. Colin, Spence, C.J. Holton, they all want to get better. I tell them all the time to ask me about whatever they want to know."

Q: Have you been hearing a lot of hate from your fellow NFL brothers for the way The U has struggled the past couple years? I'm sure they're all trying to get back at you for when the Canes were on top.
Vilma: "Like you wouldn't believe. The other guys have certainly relished 7-6, the bowl losses. It's been tough. But I've been telling them all summer just wait and see them go on the field, whip up on the Florida State's and Ohio State's. I know things are going to get real quiet, real soon."

Q: I'm sure you've been hearing these stories about some players at some pretty prominent schools getting in trouble for their activities with agents before leaving school. What are your thoughts?
Vilma: "Times have changed for athletes today. I don't know if it is good or bad what's happening. I just think the players have to be smart about their decision making, look at the big picture and what they're accomplishing by getting involved in those things. The biggest thing to me is guys have to stop talking about their night on Facebook. They don't realize they're always going to being viewed in a different light. I think kids just have to be more aware of that, realize people are reading everything. I think from a big picture standpoint, it's what they're putting out there that's getting them in trouble. It's not just Facebook, it's Twitter, too. I mean I can't talk. I know when I was 19, 20, I know I always didn't listen. I would have loved to flown to the Bahamas, partied, had a great time and not worried about the consequences. But as an athlete, you have to realize you are under constant microscope. Even more today."

Q: Let's go back to the Saints. How does it feel knowing you and your teammates in New Orleans are going into the season with a big bulls-eye on your back? After all, the Saints have always been the underdogs until now.
Vilma: "The expectations are definitely different. But I think the best thing for us is we have a lot of guys that come from winning programs. Whether its college or the pros, we've had guys who have won Super Bowls with the Patriots. [Jeremy] Shockey was with me when we won a title at UM. We have a lot guys that have been successful. The Saints as a franchise haven't had a bulls-eye ever. So, honestly, we're kind of excited about it. For me, it takes me back to my college years. You live to be that guy everybody is gunning for."

> I know some of you remember Vilma's biggest hit as a Cane. Here it is for you on YouTube.