Damien Berry feels faster and stronger than he did a year ago. That's bad news for the teams on UM's schedule, because when Berry finally got a chance to carry the football last season he was pretty good at it. 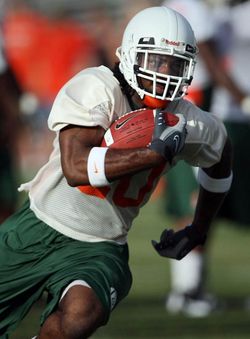 Berry said Wednesday he's weighing 220 pounds, about 13 pounds more than he did at the end of last season. But added bulk isn't the only thing new in his life. Berry has added two new responsibilities to his plate entering his senior season: being a father and being leader. And both he believes will make him even better in 2010.

A day after the Hurricanes lost to Wisconsin in the Champs Sports Bowl, Berry rushed home for the birth of his daughter, K'mahri, on New Year's Eve. He said she's added a whole new perspective to his life.

"She's amazing," Berry said. "Now, everything I do, I think about her. I know I have to work hard to be able to support her."

Described by teammate Vaughn Telemaque as "a guy you once saw chilling everywhere," Berry says being a father has calmed him down. "All that going out, I can't do that anymore," Berry said.

Three times a week, Berry said, his ex-girlfriend will drop K'mahri off at his home for a few hours, where he'll get to be dad before he heads off for class and training.

"[Fullback] Pat Hill just said 'It's going to take a lot of patience',"  Berry says with a grin. "I buy her shoes, play with her, feed her, change her diaper if I have to. But the diaper thing really isn't my forte."

Being in the spotlight at UM has never been either for Berry. But with Javarris James gone and senior Graig Cooper trying to make it back from a torn ACL, Berry will enter camp on Aug. 5 expected to be the first person quarterback Jacory Harris hands the ball off to for the majority of the season. It wasn't until the fifth game of last season that Berry touched the ball at all as a Cane. 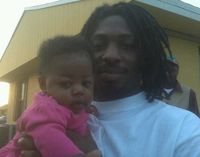 Brought in as a change-of-pace back for Cooper and James usually in the second half, Berry quickly became a crowd favorite for his straight-ahead, bulldozing-style of running. With Miami trailing Duke, fans at Sun Life Stadium began chanting "Berry! Berry!" in the second half and helped lead a Canes come-from-behind win. Berry finished the year with 616 yards (6.6 a carry) and a team-leading eight touchdowns.

But being the main man in UM's backfield? That's a label Berry, a team-first spokesman, isn't ready to accept even if sophomore Mike James (15 carries, 46 yards) and oft-injured junior Lee Chambers (60 carries, 272 yards) are the only other healthy players heading into camp who have taken a handoff at this level.

"I'm just going to try to be the best back," Berry said. "As far as being that [featured] guy I don't know. I still have to outwork Coop, Mike James and those young-ins, Lamar [Miller], Storm [Johnson], [Eduardo] Clements and Darion Hall. So, I still have to work hard. We'll push each other, and if I'm the No. 1 guy I'll be the No. 1 guy."

Berry, who was the No. 1 guy his senior year at Glades Central and led his team to a state title despite playing on a torn ACL, said his goal this offseason was to prepare himself for having to carry the load if needed. A big part of that, too, was pass blocking. "My pass protection has always been OK, but I want to be great," Berry said. "The less [quarterback] Jacory [Harris] gets touched, the better."

His main focus, though, he said Wednesday, is being a veteran leader and making sure the guys behind him can handle the job if anybody were to go down with an injury.

"What I learned from Javarris and what he learned from the guys before him is you have to teach the guys behind you everything, every detail," Berry said. "God forbid any of us go down, I want those young guys to be ready and not worry about being scared, or the bubble guts, or anything like that. I want them to be able to take my spot in an instant."

> IS COOP REALLY GOING TO BE READY? Tino Thomas, the father of running back Graig Cooper, has been telling reporters for months his son is planning on being back in time for the start of the season as long as he doesn't have any setbacks following knee surgery. The way his teammates have been talking about Cooper the last two weeks, you almost have to wonder if it's really possible. Wednesday, all three teammates made available to reporters spoke as if Cooper would be ready to go.

"I wouldn't doubt him coming back this season at all," Telemaque said. "He's working extremely hard, always getting treatment, always around the team, always lifting weights, whatever it takes. He's not using his knee as an excuse for anything. We see it as if he's going to be with the team. He tells us through his work ethic that his plans are to come back and be the same as he was before. If you ask me, he's going to play and make an impact." 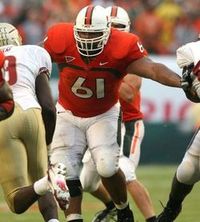 > WILL FIGUEROA SLIDE OVER TO TACKLE?: I first heard about this in the spring and I heard it again Wednesday -- do not to be surprised if senior Joel Figueroa ends up sliding over to right tackle and starting there if Jermaine Johnson, Ben Jones or even Seantrel Henderson don't prove themselves worthy of the job in camp.

Figueroa, who has played guard most of his career, is coming off shoulder surgery and has played some tackle in spot duties during games. Johnson and Jones were expected to compete for the starting job before Henderson headed for Coral Gables. UM has a history of starting the five best linemen, regardless of where they play.

Also heard true freshman Brandon Linder has been very impressive upon arrival in workouts and nobody would be surprised if he gave Tyler Horn a serious fight for the starting center job.

> VILMA DELIVERING STRONG MESSAGE OF UNITY: Having former Canes in the NFL come in for summer workouts and heart-to-heart conversations with current players is nothing new at UM. This summer, though, Vaughn Telemaque said players have been seeing a lot more of Saints Pro Bowl and Super Bowl winning linebacker Jonathan Vilma.

Telemaque said Vilma spent a lot of time this summer sharing stories and comparing his time with the Jets and the Saints.

"He told us how his time with the Jets, there were altercations, fights, people weren't doing what they were supposed to," Telemaque said. "He said during the championship year with the Saints, nobody had a problem on the team. Everybody was on the same page and they won the Super Bowl. He said we could be just like them."

"I think that's why a lot of us are trying to be more vocal, feeding off each other. It's like we all watch each other's backs."