Remember what Bryant McKinnie meant to the Hurricanes offensive line? Consider the potential addition of Seantrel Henderson just as large. 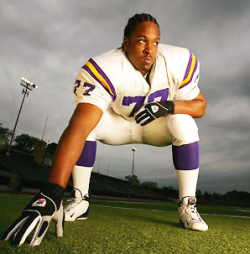 Although a few sources at UM as of late Tuesday night could not confirm Henderson (the nation's No. 1 high school offensive lineman) was already on his way to South Florida after being released from USC earlier in the day, indications are it might not be long before he becomes the last addition to the 2010 signing class.

Apparently, the only hold up at this point according to a UM source, is that the Canes have to wait until Wednesday -- when he is officially cleared by the NCAA -- to talk to him. After that, Henderson has to make it through UM admissions and the clearinghouse (so it probably will take a couple days before UM makes it official). Henderson would then likely start classes in August. I've been told UM, which looked like they would be about four over the 85 scholarship limit, has a scholarship to give to Henderson. By being released from his national letter of intent by USC, Henderson does not have to sit out this season.

Henderso, who was reportedly in Miami according to the St. Paul Pioneer Press this past weekend, hasn't spoken to any reporters in weeks and his father, who did most of the interviews for him late in the recruiting game, hasn't been answering his cell phone the last couple days. While there is likely some wiggle room (he could always back out and go to Ohio State), the word is Miami is his first choice.

Henderson (6-8, 337) is the type of lineman that every coach dreams of. Described by Sports Illustrated as "the most polished linemen of the past decade," he would become the most highly touted lineman to sign with the Canes. McKinnie, drafted seventh overall by the Vikings in the 2002 draft, was the anchor of UM's national title team. Henderson is of the same ilk, a player most expect could at least contribute right away if not start at left tackle and keep Jacory Harris' jersey free of grass and blood stains for the next couple years.

If he comes, it would also mean young, perhaps, less talented players like Ben Jones and Jermaine Johnson (slotted to compete for the starting right tackle job) will not have to be depended on to carry a huge load right away. All three could potentially all end up splitting playing time until one emerges. Neither Jones or Johnson has played much yet and are still developing.

> It is expected that offensive tackle Tavadis Glenn, who attended an academy school his senior year while playing for Jacksonville Raines, will end up at prep school.