A few UM seniors hoping to make one last splash

A common theme during the University of Miami's struggles for most of the past decade has been the failure of some highly recruited players to develop into quality contributors by the end of their college careers. Some suffered injuries that sent them off course, a handful bounced around at different positions and just never really found a home, and others were just flat out disappointments.

But for all the four- and five-star kids who floundered, some got it together late and turned out to be late bloomers. Four of the five guys in this installment of our Top 60 countdown would love to be just that -- players who survived any and all of the ailments above and left UM on the right foot. Last season, Randy Phillips and A.J. Trump were two of those examples. After being recruited out of Glades Central as one of the top recruits in the state, Phillips floundered as a cornerback for two years before being moved to safety. Injured his senior season, he received a medical hardship and came back last year to finish fourth on the team in tackles. Trump, one of the nation's top linemen coming out of Clearwater Central Catholic, missed two seasons and started only two games before his senior season. But he started all 13 games at center last season. So is there another Phillips or Trump among the seniors this group? We'll see.

> 46. Ryan Hill, CB, Sr.: Hill came to UM from Tallahassee Rickards as the top recruit in the 2006 class and one of the consensus top 10 cornerbacks in the country. But with the Hurricanes in dire need of help at receiver, he spent his first two seasons at UM catching passes. In 2008, he moved to safety and finished ninth on the team in tackles. Last season, he was supposed to make the transition back to corner but was injured early in camp and was redshirted. Now, he'll go into his final season at UM hoping to fill a huge need at corner, competing with sophomore Brandon McGee for the starting nickel job.

> 47. Kylan Robinson, LB, Sr.: When Robinson signed with UM out of Tampa Chamberlain in 2005, he was tabbed as consensus Top 20 running back in the country. But he's never received a carry at UM and has been learning how to play linebacker for the past two seasons, playing mostly on special teams. But he could be destined for much more in 2010. At the end of the spring, UM coach Randy Shannon had Robinson (6-1, 235) working with the first team at middle linebacker, saying it was his job to lose come the fall. With Sean Spence and Colin McCarthy penciled in as starters at outside linebacker, Shannon has said he doesn't want to have to move either to the middle. But he has also said he will ultimately start the three best players available. Considering redshirt sophomore Jordan Futch and junior Ramon Buchanon are improving, Robinson is likely more the underdog than the front runner to be that third guy. 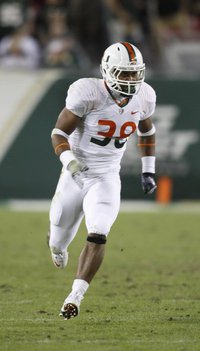 > 48. Cory Nelms, CB, Sr.: Nelms, who came to UM on a track scholarship, turned into a special teams standout last season, delivering several big hits on kickoff returns. Now, the 6-1, 195-pound senior will try to become a bigger force in UM's secondary. This spring, he was one of only a few healthy corners around and will compete to work his way in on nickel and dime situations while likely replacing the departed Sam Shields as a flier on punts and kickoffs.

> 49. Richard Gordon, TE, Sr.: Gordon, a sixth-year senior, was recruited out of Miami Norland in 2004 and has been all over the field for UM during his college career. He started out at tight end, moved to defensive end, then defensive tackle before going back to tight end as a sophomore. In 2007, Gordon (6-4, 270) was put on the kickoff return team for two games. Last season, he was hoping to become more involved in the passing game as a tight end. But after playing in the season opener against Florida State, he sat out the remainder of the season and earned a medical hardship to return this year. Newcomer Chase Ford, a transfer from Kilgore Junior College, is expected to be UM's primary pass catcher at tight end. Gordon will likely be the second option and involved heavily in blocking schemes.

> 50. C.J. Holton, LB, R-So: A standout safety at Crawfordville Wakulla (a high school in Florida State's backyard), Holton played in all 12 games last season as a special teams contributor. He finished with seven tackles (four solo, three assists). But at linebacker, he's pretty far down the depth chart. With Jordan Futch returning from injury and redshirt freshman Shayon Green enter the year relatively fighting the final backup spot on the linebacker depth chart. But if Kevin Nelson shines or one of the other incoming freshmen make a splash, Holton (6-1, 215) could be relegated to just more special teams work this year.