After a short walk-through practice Tuesday morning, the Miami Hurricanes will take a little time off before returning to campus Wednesday night for the first of three scrimmages this fall.

UM coach Randy Shannon said he expects to run between 80 to 89 plays, with another 10 to 15 dedicated to live special teams work. The scrimmage will be closed to the public and the media, although the Hurricanes website will post stats and highlights. 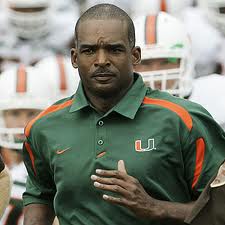 "We're going to get a lot of young guys work, and some old guys some work," Shannon said. "We just want to see guys fly around, make plays and execute under pressure. Coaches won't be on the field. There won't be a lot of coaching going on. We're going to be calling plays, so, we'll see what happens."

Shannon said only players with previous injuries will be held out. "We can't worry about guys getting hurt," Shannon said. "If guys don't practice, they can't get into rhythm, can't get in football shape. One thing you have to know is if you hold somebody [out] and contact happens in the game, fumbles happen in the game. You have to get used to the [hitting] so your body gets used to it."

Receiver LaRon Byrd said he wasn't planning on holding back at all. "We go at each other like we're the enemy," Byrd said. "You might see a receiver crack back a DB, linebacker. Once it's scrimmage time, we're no longer friends. Once it's over we go back to being friends."

> RODGERS ADJUSTING TO SAFETY: Freshman Kacy Rodgers only played cornerback when he was a standout at Southlake Carroll High in Texas. But upon arrival at UM, Rodgers (6-2, 195) has worked primarily at safety because of the need for depth.

Rodgers said veterans Vaughn Telemaque and Jojo Nicholas have spent a lot of time teaching him and he feels ultimately the experience will make him a better overall defensive back. "They say you can mess up, just play fast and make plays," Rodgers said. "I feel this experience is going to make me better overall, give me better skills on press."

"All the joy in the world doesn't compare to what you see [as a father the day they're born]," said Berry, who first daughter, K'hmari, was born on New Year's Eve. "It was just a whole bunch of love wrapped up in that blanket.

"I was in the delivery room. After she was done, I cut the umbilical cord. They washed her off and gave her to me."

Receiver Travis Benjamin, who has a four-year old daughter named Promyse Benjamin, said he's given his former Glades Central High teammate some advice he thinks will come in handy. "I told him not spoil her," Benjamin said. "Girls are the easiest to spoil."

Berry said he missed Monday's practice, but made sure he was back in time for Tuesday's walkthrough. "I really didn't want to miss it, but I wanted to be there for [my girlfriend] Mikaela," Berry said. "Coaches told me go ahead and handle your business. I know I have a job to do on the field. But I also have a priority off the field."

> QUOTE OF THE DAY: "Mike [James] is strong, powerful, and he's shifty. I'm strong, powerful, got a little shakes. Lamar [Miller] is the total package. And then we have O.T. [Graig Cooper], who is the total package, just small. Storm [Johnson] has the shakes out of this world. All of us compliment each other. We have a lot of guys with different talent."
-- DAMIEN BERRY ON THE WEALTH OF TALENT IN UM'S BACKFIELD.