« Are Thearon Collier, Steven Wesley off the team? | Main | Catching up with Bridgewater, Rogers »

Only three days left before your Miami Hurricanes get back on the field and we actually get to start writing about practice. Honestly, I can't wait to have something other than preseason hype to write about. For now, let's continue our Top 60 player countdown.

Note: I obviously made this list before it was known over the weekend that defensive end Steven Wesley wouldn't be with the team this coming season. For that reason, I kept him at No. 45. 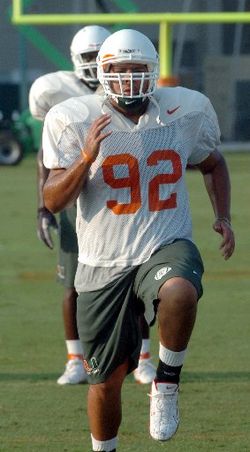 > 36. Josh Holmes, DT, Sr.: Injured for most of his sophomore season, Holmes bounced back in 2009 and started nine games at defensive tackle for UM and ranked fourth among all defensive linemen with 22 tackles while tying for fifth on the team with six tackles for loss. At 6-0, 280 pounds Holmes is obviously undersized compared to the other guys he's competing with for playing time. Coaches would probably prefer for a bigger guy to emerge this season and help fill the middle of the defense. But the Canes still like Holmes' experience and his ability as a pass rusher and believe he can be a nice change of pace. Look for Holmest to remain in the mix for a few starts and to play a lot on third down.

> 37. Tommy Streeter, WR, R-So.: One of the top high school receivers in the country and part of a sick 2008 class for UM, Streeter (6-5, 210) finally began to make some strides last season after being red-shirted following a wrist injury his freshman year. He only caught five passes for 114 yards, but his 47-yard catch in the Champs Sports Bowl could be a sign of things to come as a potential deep threat for the Canes this season. While he'll have to outwork LaRon Byrd, Leonard Hankerson and former high school teammate Aldarius Johnson to get on the field, his natural chemistry with quarterback Jacory Harris could pay huge dividends this year as Streeter becomes even more physically ready for the college game.

> 38. Harland Gunn, LG, R-Jr.: An absolute beast in the weight room, Gunn came to UM in 2007 with high expectations. Rated the eighth best center in the country by Rivals, he finally began to see real playing time last season, starting five games and playing in all 13 at right guard. One of his best games was against Virginia when he played 33 snaps and graded out at 94 percent. Now, the Canes are hoping Gunn (6-2, 315) takes the next step in development and becomes more consistent in pass protection. With so many young and inexperienced players behind him, UM needs Gunn to stay healthy and take the bulk of the work at guard.

> 39. Andrew Smith, DE, Jr.: Smith (6-3, 245) wasn't as highly touted coming out of Coconut Creek Monarch High as the rest of the freshman in UM's 2008 class. But last season he made seven starts and played in 11 games, recovering a fumble against Clemson while making a career-high three tackles against Wisconsin in the bowl game. With Adewale Ojomo and Allen Bailey back this year, it's likely Smith will come off the bench this season and compete in a strong rotation for playing time.

> 40. Lee Chambers, RB, R-Jr.: A bit of a forgotten man in UM's backfield, Chambers came to UM in 2007 from Coffeeville, Miss. as a consensus Top 10 running back in the country according to Scout.com and Rivals. Much like Damien Berry did a year ago, Chambers is hoping to surprise everyone his junior year with a breakout performance. He's shown flashes in the past. In 2008, he carries 18 times for 119 yards and had a career-long run of 25 yards against UCF. Last season, he played in nine games, mostly in mop-up duty and carried 42 times for 153 yards. While everyone figures Berry will carry the bulk of the load, don't be surprised if Chambers gives Lamar Miller and Mike James a good battle for playing time during camp. If he can stay healthy, he might be one of the biggest surprises on the year.

> 41. Jermaine Johnson, RT, R-Fr.: Big No. 78 was considered the No. 1 prep school offensive linemen by Rivals.com in 2008. After a redshirt season last year, Johnson may finally be ready to emerge this season as at least a solid backup at right tackle. At 6-6, 330 pounds, the former basketball star at Fort Lauderdale St. Thomas Aquinas had a better spring according to coaches than his primary competition -- Ben Jones (No. 44). Although Joel Figueroa will most likely begin the year as the team's starting right tackle, if Johnson can prove he's far enough along he might be able to push Figueroa back inside and make Miami even stronger up front.

> 42. Jeremy Lewis, DT, Jr.: Lewis was one of three premier defensive tackles former recruiting coordinator Clint Hurtt was able to sign in the 2008 class. So far, he's been outshined by Micanor Regis and Marcus Forston (injured in 2009). But that could change this season if Lewis (6-4, 310) plays with a little more fire. Lewis, from Palm Beach Lakes, played in seven seven games last year and recorded three tackles with a pass break-up in a win over Virginia. The Hurricanes are talented at tackle, but not deep with experience. Beyond Josh Holmes and Regis, Forston and sophomore Curtis Porter are the only players with real playing experience.

> 43. Jared Campbell, S, Sr.: The younger brother of former Hurricanes star defensive end Calais Campbell, Jared broke into the starting lineup last season when Randy Phillips went down in the middle of the year with an injury. But by the time the season wrapped up, Phillips was back and freshman Ray Ray Armstrong was making enough plays to steal playing time away from Campbell, who finished with 31 tackles and five pass breakups (2nd on the team). Most believe with sophomore Ray Ray Armstrong, redshirt sophomore Vaughn Telemaque and redshirt freshman Jamal Reid making huge strides, the only way Campbell likely sees the field for major playing time is because of injury. Campbell, who is coming off a knee injury himself, will at the very least be a key contributor on special teams. And the Canes are always looking for help on that end.

> 44. Ben Jones, RT, R-So.: The 6-5, 300 pound Jones saw limited action last season, playing in five games after redshirting as a true freshman. While coaches have always loved his athleticism and skill set, it comes down to getting Jones to turn it up a notch in intensity before he sees the field consistently. Last season, he graded out 91 percent while on the field for 37 plays.

> 45. Steven Wesley, DE, Sr.: A player who started 17 games in his career, Wesley finally began to break through last season, recording three sacks and six tackles for loss (tied for fifth most on the team). But the 6-2, 250-pound Bartow native, who was supposed to come back for his fifth year, was dismissed -- or not asked back for a fifth season -- by the team last Friday.