CORAL GABLES -- University of Miami coach Randy Shannon isn't very forthcoming when it comes to questions about depth charts, injuries and starting jobs (just ask our Susan Miller Degnan and The Palm Beach Post's Jorge Milian, who got two completely different answers on whether or not Graig Cooper will play Thursday night). 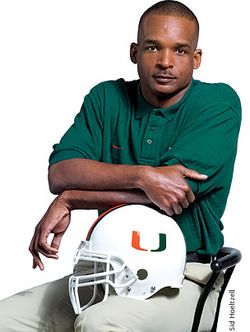 So, I've learned over the years to take Shannon's answers to those particular questions with a grain of salt. But if you ask him a question he feels won't slight one of his players or take away from the competition in practice, he'll usually answer it candidly. After missing the last two weeks of camp, I only had one question I figured Shannon would answer Monday: What did he learn about his team this fall that maybe he didn't know or see from them before camp started?

"One day in practice we had a walkthrough at 10:30 at night. We came back and brought them back at 6:30 the next morning. Nobody was tired. Nobody was late. They responded and had a great day of practice. We've had scenarios where lightning [alarms] went off. We went out half an hour later, and got practice done in an hour. We've put them in situations -- we scrimmaged in the rain, had hot days -- they responded. We went one-a-day, two-a-days, nobody had to have [intravenous fluids] or any of that. They practiced hard, their tempo was great. Anytime you can do that, it's great."

If you bleed orange and green, you have to like what you're hearing from your coach. Maturity and growth were inevitable. But to hear it is actually happening is encouraging.

There's no doubt the Canes looked like a beat up and tired football team at the end of the last two seasons. After Monday morning's practice, Shannon told reporters this is the healthiest his team has been coming out of camp. Running back Damien Berry said of the previous camps he had participated in, this one was the least physical. Those shorter and less physical practices should definitely benefit this team when it comes time to strap it up with the Florida States, North Carolinas and Virginia Techs in October and November.

A few other notes of interest...

> The depth chart is supposed to be released to the media during Tuesday's practice. My money is on Jermaine Johnson starting at right tackle over a banged up Joel Figueroa -- regardless of what the depth chart says.

> Travis Benjamin said that he, cornerback Brandon Harris and running back Lamar Miller will start the season as the team’s punt returners. Harris, Miller and running backs Storm Johnson and Eduardo Clements are working on kickoff returns.

> Shannon told reporters a few days ago his rotation at running back would likely be the trio of Miller, Berry and Mike James. I think it's really going to be four players -- freshman Storm Johnson being the other. Berry said Johnson has done an exceptional job in pass blocking situations. That's the difference, I believe, in a redshirt or a freshman season in which he contributes.

"Those guys are picking up the playbook very quickly, very rapidly," Berry said of Miller and Johnson. "Especially Storm. I didn't expect him to come in and learn the way he does. He came in on a mission. He was really competing for the starting spot and still is."

As for Graig Cooper, I'm not convinced he's healthy enough yet to play this season. He didn't play in any of the scrimmages and didn't really participate in any real contact drills. Shannon's motto has always been: you don't practice or hit, you don't play. If Cooper plays, he becomes the exception to that rule.

PUNT BLOCKS A FOCUS: Special teams Jedi master Matt Bosher said one thing the Canes have focused intently on during this fall has been blocking punts.

"It's been a big focus by the coaching staff," Bosher said. "They want to make sure we get more punt blocks as a team. We're trying to change the game, flip the field around and if we can block a punt and give our offense great field position or even scoop and score, it's a great game changer. We really have a lot of the athletes to get it taken care of. The schemes are really coming along and giving us a chance to go out there and go after the ball." 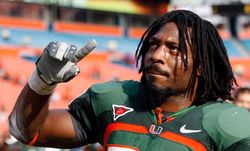 A BERRY FUNNY MAN: Running back Damien Berry looks like he's taken the lead in the race for best quote on the team this season. Berry held a fun 10-minute back and forth session with reporters Monday. Among Berry's best hits from Monday:

- On what it feels like getting tackled by Allen Bailey:  "It feels like a car wreck. It's just different from other people. Most guys have a little stomach and it's fat. Allen is all muscle. That's 300 pounds of muscle falling on you. He's not a real finesse guy."

- On what it was like watching Bailey accidentally sack Jacory Harris this fall: "That was scary. It's like a lion getting a little baby gazelle. It was like, 'Hey Bailey chill.' He's a beast. I don't know why we let him practice."

- On OT Seantrel Henderson’s eating habits: “I’ve seen this guy with a salad. I was like, ‘Bro, I know you ain’t been growing up on salads. He likes steaks and stuff, too.”

- On why he thinks the Hurricanes’ group of running backs is the best in the nation: “It’s kind of hard not to be the best when you’re so diverse back there. It’s like the Lakers. Their bench is great. I think our bench is great.”