University of Miami coach Randy Shannon said Saturday he won't really begin zeroing on position battles or worry about who is running with the first team until after his team's first scrimmage Wednesday night. 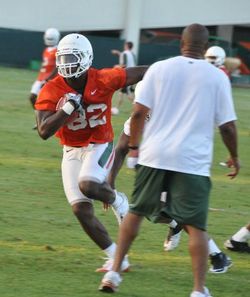 But based on what he did Saturday, Asante Cleveland can feel good about at least being on Shannon's radar. In the first and only practice open to season ticket-holders and media this fall, the freshman tight end made a spectacular play that impressed a crowd of about 3,000 -- and Shannon -- when he yanked a Spencer Whipple pass out of the air between three defenders, rolled off contact and sprinted down the middle of the field for a touchdown.

Cleveland (6-5, 250) is one of four tight ends the Hurricanes signed in their 2010 recruiting class. Junior Chase Ford (6-6, 245) also looked impressive Saturday, making a handful of catches over the middle of the field in traffic. Shannon said with only two returning veterans -- fifth-year senior Richard Gordon (6-4, 265) and redshirt freshman Billy Sanders (6-4, 248) -- there is no doubt in his mind at least two newcomers will have to play this coming season. So far, Cleveland looks like the most advanced freshman with Andrew Tallman (6-5, 245) and Clive Walford (6-5, 235) a little further behind.

Shannon said whichever two of his four newcomers emerge from camp and earn spots in the rotation will likely be in for roughly 15 to 30 plays a game. "You can't go through the season with only two tight ends," Shannon said. "Maybe the [new guys will] come in and be like Jimmy Graham last year. That's why you go out and recruit guys like that, get numbers and see what they can do after that."

"Right now I'm just trying to do my best at blocking, making a play on a ball when they throw it my way," Cleveland said. "It's a lot faster than high school. You just have to realize that and adapt to it. You have to work on blocking these defensive ends. They get off quick."

Cleveland, who said he was timed at 4.8 seconds in the 40-yard dash by UM strength coach Andrew Swasey upon arrival, said he thinks his basketball background has helped him in making the transition to college already. His big catch Saturday was just one of those examples.

"Basketball definitely helps," Cleveland said. "I use a lot of basketball techniques out on the football field. If I'm in a route and a linebacker is inside of me, I'll try to spin past him like I do against a defender in the paint. It worked today."

> QUOTE OF THE DAY: "Back in '86, '87, the biggest offensive linemen we had out here was Matt Patchan. He was about 270 pounds. 270 pounds now is small. That's why we go out and recruit offensive tackles. You go out and recruit centers, they can play nothing but center. The linemen we have now are big athletic, very competitive. The good thing: this is probably the first time in awhile we haven't had to use [intravenous therapy] on guys early. That shows you how much conditioning those guys did in the offseason, really showed where this team is going and where they've come from."
-- UM coach Randy Shannon on the size and conditioning of his offensive linemen

> Shannon said redshirt freshman cornerback Jamal Reid and sophomore offensive tackle Ben Jones, who haven't participated in camp yet, should be back Monday.

"One thing about me fellas, it's not lip service, we really preach academics," Shannon said. "Those guys are working to finish up stuff. They have finals and stuff. Finals was the last couple days. I can't put those guys in situations where they're out here practicing and they need to be studying for finals. I can't do that as a coach. Monday, no more finals, its straight ball time. So, you'll probably see those guys Monday."

> Shannon said offensive coordinator Mark Whipple missed Saturday's practice to hang out with former Brown University roommate Chris Berman, who received the Pete Rozelle Award at the Hall of Fame this weekend. Shannon said Whipple should be back Sunday.

> Quarterback Jacory Harris wore a black wrap over the top of his left thigh Saturday. Shannon said Harris and other players wear wraps "for comfort."

"It's a precautionary deal," Shannon said. "Like any injuries, you'll see guys with shoulder harnesses, certain things on their body. Those guys are fully healed, we just put it on them because sometimes its a comfort zone for guys. You'll see Orlando Franklin, Figueroa, wearing something. It just makes them feel better."

> One observation from practice: Senior Jojo Nicholas is running with the first team at safety withVaughn Telemaque. It's likely a method Shannon is using to light a fire under Ray Ray Armstrong's rear end.