Haith would welcome Seantrel on court

If there is one thing University of Miami freshman Seantrel Henderson has done in his first week in football camp, it's impress his new teammates with his athleticism. 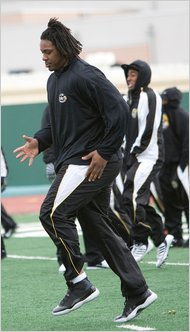 Henderson (6-8, 350) was more than just the nation's No. 1 offensive tackle coming out of Cretin-Derham Hall in St. Paul, Minn. He was also one of the nation's best big men on the basketball court. Just how good was he? Let's just say if the big guy was willing to try to pull a Julius Peppers or Charlie Ward and Randy Shannon was willing to give him the go-ahead, Frank Haith said he would welcome Henderson with open arms.

"We actually called him and were interested in him," Haith said Wednesday. "He's a good basketball player. He really has good mobility, good hands. He can hold his own. I think he could play and be an effective player at this level."

For three years, Henderson played on the same AAU team (the Howard Pulley Panthers) as Harrison Barnes, the nation's No. 1 high school basketball player who signed with North Carolina. Haith said he would love to see Henderson what it would look like if Henderson was patrolling the paint alongside sophomore center Reggie Johnson (6-10, 305).

"There would be no room for anybody else on the court," Haith joked. "It's not the easiest thing to do [to play two sports]. I'm sure his future is in football in terms of the NFL. But he definitely has a skill set. I'm not going to root for it. But if he wanted to, we would definitely welcome it."

The likelihood that we ever see Henderson dribble a basketball at UM is likely next to none. But considering Jimmy Graham made the move from hoops to football and gave the Canes a huge lift at tight end, maybe Shannon could do Haith a favor and let Henderson play some hoops if Haith needs him? Just a thought.

> BIG GAMES ON TAP: Now that the NBA schedule has been released, look for the college basketball schedule to be released soon (likely the beginning of September). The Hurricanes won't have nearly as many national appearances as LeBron James, Dwyane Wade, Chris Bosh and the Miami Heat, but they've lined up a few games that are at least sexy on paper and could get them on TV.

Haith said the Canes will play their first road game and make their first national TV appearance kicking off ESPN's College Hoops Tip-Off Marathon (24 consecutive hours of college hoops) with a midnight game at Memphis right after Monday Night Football in mid-November. After that, UM is supposed to host both Ole Miss, an NIT semifinalist, and West Virginia, a Final Four team last year, in December. There is also a road trip to Rutgers and a Christmas tournament in Las Vegas with Rice, Akron and Oral Roberts, teams that all finished with 20 wins last season. "I think it's a really good schedule that's going to test us early," Haith said.

North Carolina and Duke, the last two national champions, will both travel to BankUnited Center. The Canes will not have to play at UNC, but do have a trip to Duke. "They'll be the best team in the country this year," Haith said of Duke. "You talk about the Plumlees. Kyle [Singler] is terrific. He's one of my favorite players. I shouldn't say favorite. He's been a Miami killer. But the way he plays and what he does. He's great."

"Yeah, we played Duke tough," Haith said. "But we want to beat Duke. Our goal is to have our program win championships. It does give us a little confidence. But I want our guys to understand the big picture. Hopefully, we can learn from a team like Duke. They have guys like Zoubek who is a complete role guy. Those guys bought into a role for the betterment of the team. That's how you win." 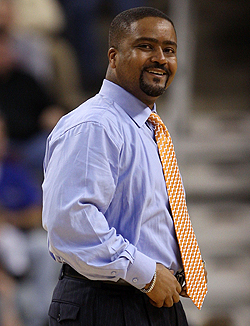 > RETURNING PLAYERS UPDATE: Haith said he's been happy with the offseason his players have had, especially under new trainer Todor Pandov.

Junior forward Julian Gamble spent his summer playing in a league in North Carolina, alongside players from Duke, N.C. State and the Tar Heels.

Point guard Malcolm Grant spent his summer training on campus and he's lost weight, dropping down from 190 to about 183. "I thought he was overweight last year," Haith said. "I think we'll see a player with a little bit more burst, a little more quickness."

Reggie Johnson is currently playing in China with Athletes in Action. Haith said he is proud of the way Johnson continues to monitor his weight and be responsible about eating. "I get daily text messages from out there," Haith said. "One day, they were all chose to go to McDonald's. Reggie chose not to go. It was good because I think he knew we were going to be tracking him."

The only player who hasn't been able to get much work done this offseason, according to Haith, has been junior swingman DeQuan Jones. "He's been down all summer," Haith said. "He hurt [his ankle] early in the summer and hasn't really done a whole lot. He's still not 100 percent. It was a really bad sprain. He was playing one-on-one with Malcolm Grant and wasn't wearing an ankle bracelet. He just came down and landed wrong on his foot. He's going to be rusty when he comes back."

Guard Trey McKinney-Jones, a transfer from the University of Missour-Kansas City, has also been injured this summer. McKinney-Jones, however, isn't eligible to play until the 2011-2012 season per NCAA transfer rules anyway. "He had a rib situation going on," Haith said. "Something to do with cartilage."

> Of the three freshmen to arrive, Haith said guard Rion Brown is most likely to make an impact right away. "He's going to be a major player for us," Haith said. "He's another guy that came in really slender. But he's picked up about 10 pounds already. Rion can score the ball. He shot almost 60 percent in high school. He has good bloodlines. His dad, Tico Brown, was the CBA's leading scorer.

> With Dwayne Collins and Cyrus McGowan gone, redshirt freshman Donnovan Kirk's role will significantly increase in the post. Haith said Kirk, who came in weighing 210 pounds, has added the bulk he's needed to compete in the ACC.

"Like Dwayne, Donnovan has that length you want," Haith said. "I think his wingspan is 7-3. He's very athletic. He plays hard, has a big-time motor. I'm not sure how we'll use him, but he'll play major minutes. He's like 225-230 now. You just love his activity as a live wire. He can shoot the ball, has a nice jump hook."

"I like our post guys. We don't have a lot of depth there in terms of numbers. But with Reggie, Julian, Donnovan, Adrian Thomas we should be good."

Freshman Raphael Akpejiori (6-9, 235) will probably only redshirt if those four stay injury free. "Raphael won't be ready to come in and be a major player right away," Haith said. "But I think he could be like Jimmy Graham was for us as a freshman. He was big, strong, physical, rebounded and played defense."

> The Hurricanes only have one scholarship remaining for the 2011 class now that forward Kenny Kadji has transferred over from Florida. "With Kenny taking one, we can kind of be selective," Haith said. "Since we don't have a lot of scholarships, we made sure to see a lot of juniors this summer. We're involved with a lot of good ones."