Thearon Collier provided the Hurricanes with a pair of exciting punt returns for touchdowns last season. The next time he tries to bring one back to the house, it probably won't be in a University of Miami uniform. 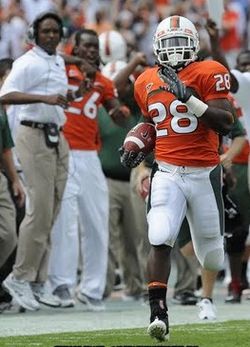 Collier, a junior receiver out of Miami Booker T. Washington, was informed after a meeting with UM coach Randy Shannon on Monday that he is free to leave the program should he choose to according to a source. The Palm Beach Post's Jorge Milian first reported the story late Monday night. According to Jorge, Collier was told he can continue taking classes at UM if he chooses, but won't be part of the team. UM begins practice Thursday.

Collier is being banished for a series of team violations that began in the spring, according to Palm Beach Post's story. Collier did not participate near the end of spring practice and did not play in the spring game. A source told me Monday afternoon Collier had not been going to classes regularly -- a team violation -- and had been given numerous chances by Shannon before finally being told he had run out of them during his meeting Monday. Collier had also been battling off the field issues. He recently had a child die at birth. But I was told his problems in school started before that.

Collier is the second veteran player to have his UM career cut short this week. Defensive end Steven Wesley, a senior who started 17 games over three seasons, was dismissed from the team Friday. Although it has been reported Wesley had academic issues, it is believed UM simply did not renew his scholarship for a fifth season.

Since 1973, scholarships have been renewed on a year-to-year basis -- ending the four-year period that scholarships used to cover. According to what I found on NCAA.org, after fulfilling an award period, an athletics scholarship may be renewed, nonrenewed or reduced based on the recommendation of the head coach. It is consistent and reasonable to expect that student-athletes be required to meet minimum academic athletics standards before athletics aid is renewed for subsequent years. On occasions where a student-athlete’s scholarship is not renewed or is reduced, the accountability and burden should be placed on the coach to remove the scholarship from the student-athlete and there should be stronger institutional appeals procedures in place.

I tried to find the same type of info on UM's website, but couldn't find one.

The Canes obviously have been teetering on the 85 scholarship limit. With cornerback Latwan Anderson and offensive lineman Seantrel Henderson late additions to the 2010 class, the Canes had to find space somewhere. Receiver and defensive end are their deepest positions. I'm not saying that's why Collier or Wesley were released. It seems each had their issues. But technically, by NCAA rules, UM can do what it wants if it thinks an athlete isn't cutting it.

> I had a few more interviews from Monday to share with you -- including ones from a pair of local defensive backs the Canes are hot and heavy after for their 2011 class, Jackson's Robenson Therezie and Pace's Jabari Gorman.