« Randy Shannon talks about scrimmage No. 2 | Main | UM debuts at No. 13 in Associated Press poll »

Our Bill Van Smith went to UM's 7 a.m. practice this morning and will be writing a feature later today.

Some quick hits from the 10 or so minutes the media is allowed on the field: 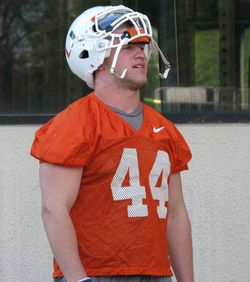 * For Colin McCarthy fans (and if you follow UM, there is likely a lot of you out there), McCarthy practiced in the middle Friday. Ramon Buchanan was elevated to first team on the outside after four tackles and an interception in Wednesday's scrimmage. Kylan Robinson, who had been practicing at first-team in the middle, was taking reps at second team. The other outside linebacker is Sean Spence. Last season, McCarthy started 10 games on the strong side, and ranked second in total tackles with 95. He also was second among all UM defenders with 10.5 tackles-for-loss. McCarthy normally plays in the middle in nickel formations.

* Wide receiver LaRon Byrd is wearing a brace on his left leg and has a bone bruise on that knee, according to Canesport.com. Coach Randy Shannon said Byrd will "probably" be back in practice next week, "maybe Monday or Tuesday.''  Shannon said Byrd is doing strength and conditioning drills.

* Shannon said quarterback Jacory Harris was a quiet leader, "not a yeller or screamer," though it appears Harris is becoming more vocal. Shannon also said he has not decided who the backup quarterback will be among Alonzo (A.J.) Highsmith, Spencer Whipple and Stephen Morris. We're thinking it's Alonzo.

* Shannon was asked what, in particular, had to be worked on before the Florida A&M game. He replied, "Everything. Too far away to worry about A&M.''

* UM has its final two-a-day sessions Saturday, then a short walk-through Sunday.

Some video interviews courtesy of UM.