The sun wasn't up yet, but it was still plenty loud in Coral Gables Wednesday morning. That's because six speakers were blaring crowd simulation noises as your 12th-ranked Miami Hurricanes began practicing at 6:20 a.m., four days before their showdown with the No. 2-ranked Ohio State Buckeyes at the famed Horseshoe. 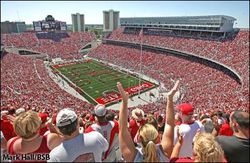 UM coach Randy Shannon said Tuesday he doesn't think his players will be fazed by playing at a tradition rich stadium that seats 105,000 because they've played in tough places before and live in star-studded South Florida.

"You see a lot of traditions in small towns and in little cities like [Columbus]," Shannon said. "But the guys aren't enamored with it because of what we see when we go out [in South Florida]. You may see an Alex Rodriguez, a Wayans brother, or Dwyane Wade. Those are big name guys. When you go to places that are traditional, like Ohio State, Michigan, places like that, it's great to play there, but you've been in awe already. The difference will probably be the noise [factor]. No matter what happens, you can't simulate that in practice at all."

So how loud of a place is the Horseshoe really? That's debatable. The loudest football stadium I've been to remains the Orange Bowl with Ben Hill Griffin Stadium in Florida and Florida State's Doak Campbell Stadium not far behind.

UM linebacker Colin McCarthy and cornerback Brandon Harris were both heavily recruited by Ohio State coming out of high school. McCarthy went to a game at Ohio Stadium. Harris said he didn't because coach Jim Tressell wouldn't allow out of state visitors to go to games during the season. "He prefers for guys to come in February or January so they get a feel for the cold winters," Harris said.

But from what McCarthy remembers: "It’s a crazy atmosphere.”

“I’ve heard it’s a loud stadium," defensive tackle Marcus Forston said. "But once you go out there and do what you have to do, you can quiet the crowd.”

A couple more notes from Wednesday's practice (in the five minutes we got to see of practice in the dark) and leftovers from Tuesday...

> Running back Graig Cooper, not expected to play Saturday at Ohio State, was in full pads Wednesday. But he wasn't practicing. He was just standing around during practice.

> Safety Ray Ray Armstrong picked off a pass from A.J. Highsmith during 11-on-11 drills before taking a big lick from right tackle Jermaine Johnson, who was running with the second team.

> According to UM SID Chris Freet, the Canes will wear white jerseys on top of green pants for Saturday's game at Ohio State. The all-white "Storm Trooper" uniforms will make their debut at Georgia Tech.

> UM coach Randy Shannon said on Dan LeBatard's radio show Tuesday he planned to watch episodes of NCIS or old, black and white war movies during his free time to prepare himself for Saturday's game.

> UM defensive tackle Marcus Forston, who started in his first game Thursday after missing most of the 2009 season, said he felt fine physically after playing the entire game for the first time in his career. "Jeremy Lewis got hurt. So, I ended up playing the whole game," Forston said. "I wasn't winded or nothing. That's the first time I played a whole game and finished a game with a whole lot of energy. I thank coach Shannon and [strength] coach [Andreu] Swasey for giving me that extra running to help me get to where I am today."

> Forston had the best quote of the day Tuesday in discussing the growth process at UM: "Coach Shannon preaches every day about the process. Like he said, if we put a lot of crumbs together it'll eventually make a loaf of bread. Every day you have to go out to practice, try to get something out of practice, try to go for greatness. You go to practice and focus on what you want to do to get better."

"I face the hardest defense in practice. From what I've seen they have a great defense. But we have Sean Spence, Colin McCarthy and a great defense right here. Why should I be worried about what they have?

> One common theme from several UM defensive players Tuesday -- it's time for them to step up and deliver because the offense has usually been responsible for most of the team's big wins.

"I don't think our defense is getting a lot of credit," McCarthy said. "We did it against FAMU. But we have to do it against Ohio State, one of those power house teams. A team like Ohio State is a great opportunity for us. As a defense, we're as ready as we can be. I think our coach has put us in a great situation, great scheme to stop them. The biggest thing for us is to stop the run. I think we force them to be one dimensional, that's going to be enough to help us win this game."

> UM cornerback Brandon Harris said Ohio State's receivers are very good. "In all honesty, we have great respect for those receivers," Harris said. "[DeVier] Posey is obviously the leader of that group. He does a great job of getting open. They like to throw the ball vertical. That's been the main emphasis. We have to stop those deep threats. Hopefully, everything else should follow from there."