« Canes slip to No. 17 in AP and Coaches poll | Main | Shannon orders shutdown of Twitter accounts »

Now that the Canes have wrapped up a 36-24 loss to the second-ranked Ohio State Buckeyes, here are few final post-game thoughts: 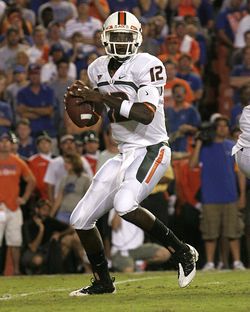 > The Canes proved they aren't ready to compete for a national championship yet... All week long this game was presented as an opportunity for this program to put itself back among the elite in college football. Had the Canes played better, they might have been able to say that even in a loss. But it's the way they lost with the turnovers, missed tackles, penalties and mistakes that proved to me that this team is still not ready to make the jump up. Here are the facts: Randy Shannon's record against Top 25 teams is now 1-6. His record away from Sun Life Stadium (those would be road games or bowl games) is 8-12. Only one of those wins was against a ranked opponent (FSU in last year's season opener). Point the finger at the coach as much as you want to, but at what point do the players have to start delivering?

> Jacory Harris' interception woes continue... I put a lot of the blame for Harris' 17 interceptions last season on his injured thumb. Safe to say it's fair now to just criticize his decision making. Ohio State is obviously a very good defensive team and they deserve credit for the plays they made and the confusing coverage schemes they ran (dropping defensive linemen back into coverage on zone blitzes). But Harris is a junior now. The pacifier is out of his mouth. Travis Benjamin didn't help Harris out on two of his four interceptions Saturday, literally deflecting one pick right into a defenders hands. But the interception that bothered me the most was the one Harris threw with Benjamin's back turned to him. Both players messed up. But Harris said himself he should have never thrown the ball. The bigger issue here isn't that he manned up for his mistakes after the game. It's that he's still making them. Offensive coordinator Mark Whipple shares in that responsibility. So does the fact Harris' doesn't have anybody pushing him for the starting job. Let's not forget three QBs left this program in the last three years. Maybe it's a little easier to take chances when you know you're the only guy who is going to play.

WHAT TO LIKE FROM THE GAME
> Lamar Miller...  The talented redshirt freshman continues to show us why his teammates rave about him. His 88-yard kickoff return for a touchdown was impressive. So, was the fact the distance between himself and the Buckeyes chasing after him continued to widen as he sped away downfield. It's a shame he isn't being utilized more. He had only three carries for eight yards and one catch for eight yards to go with one other kick return (12 yards). Memo to Mr. Whipple: No. 6 needs to touch the ball more than six times a game.

> Defensive stops in red zone... The Canes' offense didn't do the defense any favors Saturday with their turnovers. Same with the kickoff coverage team, which gave up three returns of over 40 yards. But you had to like the way the defense stiffened in the red zone. Ohio State had nine drives inside the Canes' red zone Saturday and only three resulted in touchdowns. UM forced them to go for field goals five times. That's improvement. I also liked the fact the defense had 11 tackles for loss in the game.

WHAT ELSE WAS TROUBLING
> The rest of the day on defense... Sean Spence had a career-high 11 tackles and couldn't do much to stop the 18-yard touchdown pass Brandon Saine made on a perfect throw from Terelle Pryor. Spence played well and I don't think the Buckeyes threw once to Brandon Harris' side of the field. But the rest of their homeboys on defense? Not so much. Shannon guessed after Saturday's game that Ohio State had at least 70 yards after first contact. That equates to missed tackles galore. Ohio State ran for 181 yards -- Pryor picking up 113 of those on scrambles. Pryor was only 12 of 27 for 233 yards passing. But he found DeVier Posey for a 62-yard gain and Dan Herron for a 47-yard gain and orchestrated a 2-play, 80-yard scoring drive that took 36 seconds to complete. That's not good defense. Neither was just one sack and zero turnovers.

> Special teams kickoff coverage... Miller and Travis Benjamin (79-yard punt return) might have become the first UM duo to return a kickoff and a punt return in the same game -- at least through the late 1970s anyway. But as nice as those returns were, the Canes have up a lot of field position on kick coverage. Matt Bosher also had a kick blocked and a 46-yarder he missed. I'm not upset with Bosher. He's missed a total of six field goals now in his career. But why does he continue to have to make the tackle on kickoff coverage? This isn't a new problem.

A FEW FINAL THOUGHTS...
> I said this before the game and I'll say it again: This loss wasn't crippling. UM can obviously go on to win the ACC title and the season would be deemed a success. This loss was just disconcerting because we saw much of the same mistakes we saw a year ago from a team that is supposed to be more mature and ready to win. As long as the Canes continue to improve, win the next two games on the road and make a strong push to the ACC title, Shannon and Harris don't have to worry about job security.

> It's officially time for UM's other receivers to start catching up to Leonard Hankerson.

> The injuries to Marcus Robinson and Curtis Porter could turn out to be huge. The one strength of this UM defense has is the depth on its defensive line. But the injuries are beginning to pile up.

> FYI, the Canes will be off this week until Thursday and Friday.