Gameday Preview: No. 19 UM at Pittsburgh

PITTSBURGH -- The 19th-ranked Hurricanes (1-1) try to get back on the winning side of things by facing one of their former Big East rivals, Pittsburgh (1-1), for the first time since leaving for the ACC. The 7:30 p.m. game will be televised on ESPN and on the radio at WQAM.com. Feel free to participate in our discussion below as you tune in.

REWIND: The Canes lead the all-time series 21-9-1. The last time they met, UM came away with a 28-14 win at Pitt. Jarrett Payton led UM's offense rushing for 131 yards and a touchdown while Jonathan Vilma had a game-high 11 tackles as UM's defense produced nine sacks and three turnovers. The Canes have won six in a row in the series. The Canes are looking for its 33rd consecutive win against an unranked, non-conference opponent in regular season play.

ABOUT PITTSBURGH: The Panthers opened the season ranked, but quickly dropped out of the Top 25 poll with a tough loss at Utah. The following week, they crushed New Hampshire on the same day the Canes lost at Ohio State. Pitt has compiled a 6-9 mark on Thursday night, its last appearance coming on Oct. 2, 2008, when the Panthers defeated No. 10 USF in Tampa, 26-21. Pitt is 1-3 against Miami on Thursday night, the lone victory a 21-17 decision in 1997 at Pitt Stadium. 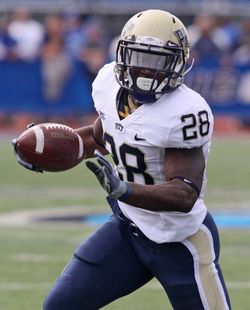 Pittsburgh's offense is led by Big East 2010 Offensive Player of the Year and Rookie of the Year Dion Lewis (5-8, 195), who has struggled rushing for only 102 yards on 35 carries (2.9 avg) in his first two games as a sophomore. Last season, Lewis lead the country in rushing with 1,799 yards. Utah held him to 75 yards on 25 carries. Ray Graham (5-9, 195) has had fewer carries, but has been explosive, rushing for 115 yards on nine carries. First-year starting quarterback Tino Sunseri has completed 65 percent of his passes for 459 yards, 3 TDs and 2 INTs in his first two starts. His top two targets in the passing game are big receivers -- Jon Baldwin (6-5, 230) and Mike Shanahan (6-5, 220). Baldwin is the experienced veteran with 15 catches of 40 yards or more -- including nine that have gone for touchdowns.

The Panthers defense was one of the best country last season, leading the country in sacks and ranking 17th in rushing defense and 23rd overall in total defense. But injuries have hurt them a little bit. Big East Defensive Player of the Year Greg Romeus (Coral Glades High) had back surgery and isn't expected to return at the earliest until November. Junior defensive tackle Chas Alecxih (6-5, 280) could still present a huge problem for the Canes in the middle, especially after seeing the success Ohio State had creating pressure up the middle of Miami's offensive line. Alecxih has three of his team's six sacks this season. Right end Brandon Lindsey (6-2, 250) has two sacks starting in Romeus' place. Strongside linebacker Greg Williams (6-3, 240) ranks second on the team with 11 tackles. The Canes are going to want to keep the ball away from sophomore free safety Jarred Holley (5-11, 180) who has both of the Panthers interceptions this season.

FOR THE CANES, THINGS TO KEEP AN EYE ON...
> First and foremost, how quarterback Jacory Harris bounces back from what he called his worst week as a Hurricane following a loss. It wasn't just the four interceptions against Ohio State for Harris, but the off the field issues -- racist Twitter messages, etc. The Canes need Harris, who was obviously bothered by it all, to prove he's focused on football and zeroed in on his receivers. The smart thing for offensive coordinator Mark Whipple to do is take the pressure off Harris from having to make too many big plays with his arm. UM coach Randy Shannon said his running backs Damien Berry, Lamar Miller and Mike James would get at least 20 touches each this week between rushes, returns and receptions. If the Canes are smart, they'll do just that. Pittsburgh's run defense isn't at full strength and gave up 122 yards on 27 carries in its loss to Utah. The Canes should be able to run the football and then throw it pretty easily. The Panthers rank 94th in pass defense.

> All week long we've heard about the amount of attention the Canes have spent in practice trying to improve their tackling and trying to create turnovers. It's time to see if the hardwork paid off. Pittsburgh's offensive line had to replace all three interior linemen from last season's team -- a big reason the team has struggled running the football. There's no reason the Canes shouldn't be able to bottle up Pitt's running game and put pressure on the Panthers' young quarterback. Allen Bailey, who hasn't had a sack since last Halloween (a stretch of seven games), will see more time at tackle this week. I'm guessing he'll be a big factor in this game.

> Heinz Field can be a tricky place to kick field goals because of the wind. After missing one in his last game and having another blocked, Matt Bosher can go a long way in improving his NFL stock with a good game in this one.

> MY PICK: This Pittsburgh team was picked to win the Big East in the preseason and as upset and focused as UM might be, I don't see a blowout happening. Including its season-opening 27-24 overtime loss at Utah this year, Pitt's last four losses have come by an average of just 3.5 points per game. The Canes are 8-12 all-time under Shannon away from home. This won't be easy, but they'll find a way. UM 26, Pitt 17.

With the late game start, I won't be doing any live chat this week. Feel free to discuss the game below.