Marcus Forston knows Jacory Harris about as well as anyone at the University of Miami. They've been friends forever -- since before Harris even became the starting quarterback on Miami Northwestern Senior High's back-to-back state championship teams in 2006 and 2007. Win or lose, Forston has learned, Harris usually bounces back and is always usually positive. 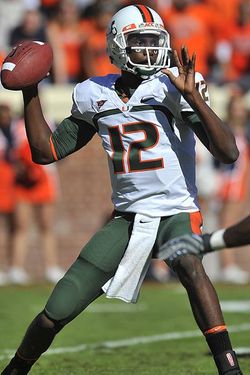 So when Forston noticed Harris being unusually quiet after last week's 36-24 loss at Ohio State, he knew something was wrong. Turns out, there was. Harris revealed Sunday that shortly after the loss to the Buckeyes he received a racially charged tweet directed at him. The message: "[UM fans] don't want a black quarterback here."

"It hurt him a lot," said Forston, whose locker was across from Harris. "He never in his life would expect that to come from a fan, especially at UM, being in Coral Gables, how diverse it is down here. He didn't really tell me what happened. He just said a lot of stuff was going on from Twitter, but he didn't get into details."

Harris called the message "disheartening" and admitted "it kind of brings you to tears." He's absolutely right. The type of bigotry we still see in society today is sad. Some of the comments on this blog after the Ohio State loss had to be deleted because they were horribly racist and just flat out disgusting. And there is no place for it in public forums or even the social networks.

Harris has every right to feel hurt. But at the same time, he shouldn't let any of this get out of control. Harris' comments Sunday -- whether he intended them to or not -- is sure to shine the spotlight on him even more over the next couple days as the 19th-ranked Hurricanes try to regroup in front of a national ESPN audience Thursday night at Pittsburgh. It's only natural now that the national media will jump all over this story because of three key elements: racism, black quarterbacks and social media.

Frankly, if there is anything Harris could use right now it's less of that. As cool as he's proven to be at times throughout his college and high school career at handling pressure in the fourth quarter and leading his teams to victory, Harris showed us Sunday where his mind was at -- and it wasn't necessarily football. He was already accused of that before, when two hours before kickoff in Columbus he was tweeting how upon arrival at the Horseshoe there were "middle fingers everywhere."

Look, it's not easy being the starting quarterback at the University of Miami. Being black makes it even tougher when there are obviously some people in this world who continue to be racist pigs. But this football team needs Harris, perhaps more than any other player, to be focused on football. They need him to be a leader about as much as they need him to stop throwing interceptions.

Like it or not, there doesn't appear to be a Bernie Kosar or Vinny Testaverde here in waiting. Stephen Morris is being redshirted and that other next star -- Teddy Bridgewater -- is still at Miami Northwestern.

Racism sucks. But at the end of the day, Harris should care a lot less about being disliked by some racist idiots and a lot more about winning. He shouldn't be sending out tweets apologizing to Canes fans who stick with him and then chastising the large majority that jump on and off the bandwagon. He needs to go back to what he came to UM for. That's to win football games and to try to lead this program back to the top.

> Harris said receiver Leonard Hankerson is leading the team in receptions not because he's become his favorite target, but because "he's in the right spot at the right time - he's always basically wide open when I throw it to him. He works hard, does everything right like the rest of the receivers. I guess the ball is just flying that way. And it's still the beginning of the season, just two games."

>  Asked about taking chances as a quarterback and knowing when not to throw the ball, Harris said, "No matter what the situation the game is, I'm going to be the same quarterback. I don't think the less chances I take I make smarter reads. It always seems at the end of the game everything opens up and it gets kind of easy. I don't have to take many chances when I'm in the game, because it's basically there."

It's really the last part of that quote that opened my eyes a bit. If you think about it, the only thing that's usually common at the end of a game is that Harris is in the shotgun, running a no-huddle offense with five receivers. That's pretty much what he did in high school. I don't want to put words into his mouth. But it sounded to me like he almost admitted he's only comfortable throwing in those situations.

CANES AUDIO: For the complete press conferences from UM coach Randy Shannon and Jacory Harris, please click on the link for Canes Audio.