How do you tell a player who has blown out his knee and is out for the season to keep fighting their way back? What do you say to a player whose older brother was shot and killed over a set of car rims?  How do you comfort an athlete who just lost an uncle -- and a big fan -- to a brain tumor? 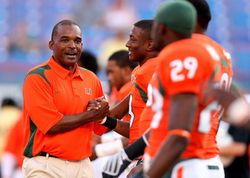 How do you play counselor and coach when all of that pain has inflicted itself on just one of your football players in a span of three very tough months?

University of Miami linebacker Jordan Futch didn't ask for all of that anguish, but it came his way last October. First, he tore the anterior cruciate ligament in his left knee five games into his sophomore season (his second season-ending injury in a row).

Then, it got worse when his mother, Caroline Futch, called him frantically and in tears on Jan. 21. Much to her relief, her first born, Jordan, was fine. Her elder step son, Sean Jr., wasn't as lucky. The rumors she'd been hearing about her husband's son being killed later turned out to be true. Sean Jr., 21, was with found in the back seat of a friend's car in Liberty City hunched over the backseat of baby he was trying to protect from gunfire. There was a bullet hole in the back of his head, all part of a deal gone wrong.

"It wasn't his fault," Jordan contends. "He was just in the wrong place at the wrong time. Some guys tried to steal some rims he was trying to sell. They started beating his friend up and so he got his gun out and tried to protect himself. And then they started shooting. There was a child in the back seat and my brother was trying to protect this child. My brother jumped back into the car and tried to protect the child and get in the way. They put a couple rounds in the car and unfortunately one hit him in the back of the head, which was the killer shot. That was it. He was gone.

"He wasn't do anything bad. He was trying to get some money for his rent. It's a hard world out there with this economy."

Guns, drugs and bad neighborhoods are things Randy Shannon tries hard to keep his players away from. But as much as he's done to build a divide from trouble, tragedy still finds its way into their lives through friends and family members. Futch isn't the only Hurricane who has lost a family member close to him recently. Last season, safety Randy Phillips lost his younger brother Randall to a drug overdose. This summer, freshman linebacker Travis Williams lost his brother to gunshots shortly after arriving on campus.

Tragedies? Shannon knows them all too well from his own life. You know the stories. His father was gunned down when he was 3. He had older twin brothers addicted to crack cocaine and other siblings die from AIDS. Some people might could grow numb to bad news. Somehow, Shannon doesn't.

When Futch's mother called him to tell him about what her son was dealing with -- two weeks before National Signing Day no less -- Shannon called Futch into his office. Shannon put his arm around him -- like he does with all the others you never hear about -- and he let Futch cry.

"I know they speak on a man-to-man level I'm not privy too," Caroline Futch said. "But whatever he's done to help Jordan, he's done an amazing job. When I spoke to Randy, I told him 'Look I know you have a perspective going through this with your family. I've never lost a child or sibling. Please do what you can.' He just knew what he had to say to Jordan. I can't tell you where it came from other than the coaches' own personal experiences. I'm grateful. You see how Jordan is now."

Futch is grateful, too. The way he talks about Shannon goes beyond your typical coach-player relationship. It's not easy to get a 6-3, 240-pound linebacker to cry. But when Futch talks about what Shannon means to him, the tears flow.

"I just have to thank god everyday, thank the man above and thank coach Shannon for the love and support," Futch said. "Coach Shannon, like I said, I don't want to start tearing up, he was the real supporter. He had his issues with his family, a lot of people lost. It was real special to have him and that's why I love coach Shannon so much and I'll do whatever for that man because I know he'll do whatever for us. It means so much to have him here as coach. He's another father figure for me. I really appreciate him."

As you know, Shannon isn't one to smile much. But when I told him what Futch had said about him, he couldn't help himself. If there's something Shannon loves about being the coach of this program -- in the city he grew up in -- it's being more than just the coach.