Randy Shannon has had a lot of teachers throughout his life. But none know him better than the guy who will be coaching against him Thursday night. 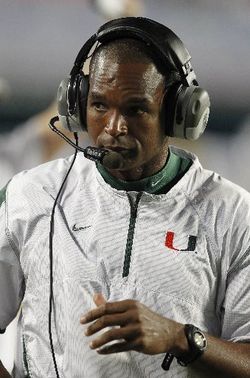 "Randy and I go way back," Pittsburgh coach Dave Wannstedt said during Monday's Big East Teleconference. "I've probably been involved with his football life most of his life."

Wannstedt isn't kidding. As the linebackers coach and defensive coordinator at Miami under coach Jimmy Johnson, Wannstedt was involved in recruiting Shannon out of Miami Norland High and coaching him with the Canes. When it was time for Shannon to go the pros, Wannstedt was in Dallas with JJ when the Cowboys used their final pick in the 1981 draft to take Shannon. When Shannon's playing career was done, Wannstedt hired him to be the Dolphins linebackers coach.

"When you hire coaches you want people that No. 1 are very knowledgeable particularly about what you want to do defensively. Randy is very smart that way," Wannstedt said. "You want to hire people you know as people, you know their work ethic, you know what they stand for. And people that you trust so when you get to those tough parts of the season people as you always do, you want to surround yourself around people that are loyal."

Shanoon been loyal to the Canes since leaving the Dolphins. And when he became head coach four years ago, he once again went to Wannstedt for assistance. 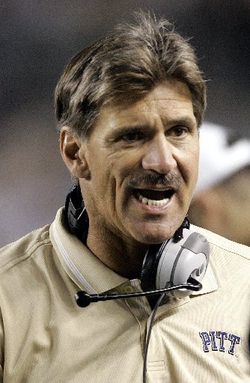 "I asked him to come up and spend some time [two days] with some of our defensive coaches. They talked about some of the things they were doing on defense and it was a great exchange," Wannstedt said. "We talked a little bit about certain things that come up with head coaching and hiring people. There were no specific topics that we sat down and talked about. Me knowing the culture at Miami and having coached there, we were able to have a real good conversation. Heck we talked about ex-players, from their involvement to spring practice. We kind of just talked back and forth on a lot of topics."

There's no telling how much Wannstedt's familiarity with Shannon will really help or hurt the Hurricanes Thursday night. But the Panthers, picked by many to win the Big East this year, will be no pushover. Shannon said Sunday he expects a physical battle.

"Knowing Dave Wannstedt for a long time - him being my coach and working with him at the Dolphins, I've spent a lot of time with him. He wants to be a physical, tough team that will bend but don't break defense," Shannon said.

"It's going to be an exciting game, two teams that are 1-1 and looking for an opportunity to get better on both sides of the football and also on special teams. The Pitt offense, they have a 1-2 punch running the football that will be key to this game. They have a big-time receiver that makes a lot of plays for them, is their go-to guy. Defensively they play together as a group. They may not have any superstars, but they line up in a 4-3 scheme and play sound. It's going to be fun to see what happens Thursday night."

A few more tidbits from practice...

> While tackling has been a huge emphasis this week in practice, creating turnovers -- particularly hanging onto interceptions -- haven't been far behind.

"That's probably one of the biggest things we've worked on this week," senior cornerback Ryan Hill said. "Striking the ball carrier, stripping the ball, intercepting the ball. I think coach Shannon, he's out there throwing balls after every play to the cornerback.

"It's kind of funny but we're doing everything we have to do to make sure we catch the ball. I saw him out there today throwing the ball to Demarcus Van Dyke. I was like what is he doing? But I like when coach Shannon does stuff like that. It's having fun. But it's also making us work and making us think about creating turnovers at the same time."

> Pittsburgh quarterback Tino Sunseri has only made two starts in his career, but he's thrown for 459 yards with three touchdowns and two interceptions while completing 65 percent of his passes.

"He is doing a great job for them,'' Shannon said Tuesday. "He is not turning the ball over a lot and doing a lot of good things just managing the offense. They have two great receivers that they are going to throw the ball to and they have a great running back. We know we have to come out and control the run game and make sure that those big guys don't get big plays.''

> A big key for the Canes secondary will be covering receiver Jon Baldwin, who at 6-5, 230 pounds will have a rather large size advantage against UM's corners. In just over two seasons, Baldwin has 15 catches of 40 yards or more -- including nine that have gone for touchdowns.

"That's the matchup you want,'' Hill said Monday. "If he's the go-to guy, that's who you want. You can kind of make a name for yourself covering a receiver like that. You look at Randy Moss and Darrelle Revis yesterday. You want that challenge if you're a corner. Obviously, we have a challenge in front of ourselves.''

> Heinz Field is notorious for having some of the worst wind conditions of any stadium in the NFL. Shannon said Monday it will be up to special teams coach Joe Pannunzio and kicker Matt Bosher to determine which way they want to kick.

"You just wait until game time because the wind does swirl with that stadium and Giants Stadium is like that,'' Shannon said. îîSometimes the Dolphins' stadium swirls a little bit, you have to figure out what type of wind it is each day."

> On the injury front, Shannon said defensive end Marcus Robinson and defensive tackle Luther Robinson both practiced Monday. We just aren't sure to what extent. I saw Marcus Robinson limping off the field and with a brace on his right ankle after practice.