« Hocutt weighs in on power of Twitter | Main | Tirade? About time we see Nasty Randy »

With the defensive line thinner because of injuries, look for defensive end Allen Bailey to play some defensive tackle -- particularly in third-down situations. 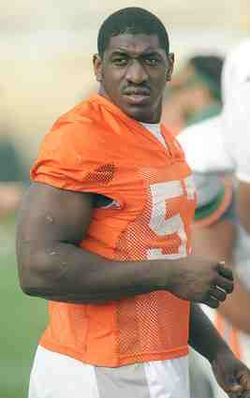 Bailey, who has started at left defensive end each of the last two games, hasn't had a sack since last Halloween.

"He came close a couple times, but that's part of it," Shannon said. "It goes in rhythms. Like last year, he didn't have anything , then all of a sudden in the middle of the season he got seven real quick, then dialed off a little and kept coming back. It just goes in rhythms and cycles on what the protections are doing and what people are trying to accomplish on offense."

> Defensive linemen Luther Robinson and Marcus Robinson were dressed but on the sideline not participating. Both were seen limping. Shannon said both "should be back [practicing] probably tomorrow or the next day. They walked around today, did some stuff. At least they're not in a boot or nothing like that, which is good. They should be back, but we still always move guys around [on the defensive line] in practice.''

> Defensive tackle Curtis Porter, who was carted off the field at Ohio State with a right-knee injury, was not at Greentree Field Thursday as far as we could see. When asked about the extent of the injury, Shannon said: "long term, don't know yet. We'll just see how he comes along."

> Shannon on his defensive line philosophy: "When you're able to rotate guys, that's when you'll play real good. If you only have got five guys that are real good then only five guys are going to play and you've got to get in great shape at defensive line. But fortunately we have numbers and guys we feel real good about playing and stuff like that."

> Shannon also said right tackle Joel Figueroa was "a little nicked during the Ohio State game but then he came back, bounced back.''

> We also didn't see linebacker Shayon Green. Shayon had his right forearm wrapped in ice and was holding it up gingerly after Ohio State.

> Of outside linebackers Kylan Robinson and Ramon Buchanan, Shannon said: "Ok, coming around. You still want those guys to get a lot better. You're always wanting them to be like Sean [Spence] and those guys but, you know, everybody is different. When there are two backs in the game they'll be playing a lot but when there are three receivers you just go best personnel. Our best personnel with three receivers in the game, you just put in an extra DB.''

> Shannon said he never thought about taking out quarterback Jacory Harris after things started snowballing with the interceptions (despite at least one not being his fault): "No, no, no, no,'' the coach said, "because he wasn't frustrated. He was disappointed, but he wasn't frustrated. ..He's a gamer. He's not going to be a guy who shies away.''

> Shannon said linebacker Jordan Futch, in his first game back from reconstructive knee surgery, "wasn't sharp, wasn't crisp. But as far as running around and all those things he did all the twisting and turning in the game and played on special teams. You've got to ease him back into it.This week when we play Pitt he'll probably get a little bit more action, maybe on base defense.''