Banning Twitter wasn't the beginning of the new, meaner Randy Shannon. And hopefully for the Canes, it's not the end. 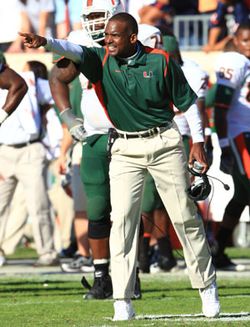 As most of you know by now, the Hurricanes were banned from using Twitter earlier this week by their head football coach. What most of you probably aren't aware of is "that punishment" was not the worst of it. According to a story by the Associated Press, Shannon lit into his players after Saturday's loss at No. 2-ranked Ohio State. Some of you might be thinking, well, what's the big deal? He should have.

As it turns out, it might have been the first time Shannon has actually given his team a real tongue-lashing.  "I never have seen him like that," offensive lineman Orlando Franklin told AP, "but I can't say I was shocked."

According to the story, Shannon spared no feelings in that postgame meeting. Receivers and running backs who ran the wrong routes and played a role in Jacory Harris throwing four interceptions all felt his wrath. Linemen who missed blocks that led to sacks, they felt the heat as well. And most of the fire was directed toward those defenders who missed tackles, especially ones in the backfield - Shannon stopped counting after that list exceeded 10.

""I've never been a guy that just goes off," Shannon said Thursday after Miami's first practice since the loss. "But they needed it at that time because I was frustrated. We're a good football team. And we could have done something that hasn't been done here in a long time. Ohio State is a good football team, a great football team, but we made so many mistakes we didn't give ourselves a chance."

As tough a stance as Shannon might take on guns, grades and goofing around, it is during the games most of his critics would like to see more of Nasty Randy. If you haven't noticed, Shannon hasn't been one to show much emotion on the sidelines at all. At times when the Hurricanes have been at their worst in his four years as coach, TV cameras have caught Shannon almost expressionless.

There have been only two times I can recall Shannon being upset. The first time was when Urban Meyer ran up the score with a late field goal against UM in 2008 and Shannon shook Meyer's hand quickly before rushing off the field. The most visible was last year's game against Clemson when he and offensive coordinator Mark Whipple exchanged heated words on the sidelines before halftime.

Those two brief moments shouldn't be what we remember. There should be at least two blow ups a game according to a few former Canes I spoke with on Wednesday night. 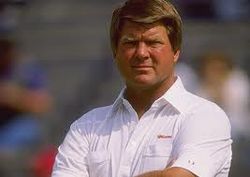 Leon Searcy, who won two national titles at UM (1989, 1991) and now hosts the Canes4Life TV show on CBS-4 every Saturday at 11:30 a.m., shared a few great stories with me about Jimmy Johnson and the fire he coached with on the sidelines.

"I remember my freshman year, we were up on Arkansas 51-0 in the fourth quarter," Searcy recalled.

"Now, Jimmy wanted to destroy these guys. Arkansas was a school that had passed him up for a coaching job. He came over to us on the sidelines and said 'If you mother [expletives] let these guys score, I don't care what the final score is, I'm going to run your mother [expletives] [expletives] for three days.' We were scared. Second team was in there. Arkansas ends up scoring on like the last play of the game. The next three days, all we did was run.' We knew the next time he said 'Don't let this happen, we weren't going to let it happen."

Fear can be a remarkable motivator. Former Canes cornerback Duane Starks (this week's guest on the Canes4Life show) told me fear of losing his starting job is what kept him pushing himself to be the best on the field every week during his time at UM.

"I knew when I played that half-ass stuff wasn't going to work," Starks said. "You had to bring it every day or somebody was going to take your job from you. Maybe, they need a little more of that."

Part of that, starts with emotion. And that starts at the top.

I'm not saying the players on this team don't want to win. The loss at Ohio State stung. But when players begin to feel comfortable they'll be out there every Saturday because the guy behind them can't beat them and then, they don't have anyone coming down hard on them from the top when they don't deliver, well, mediocre play becomes accepted.