With the Hurricanes playing a huge game this week against North Carolina, it would have been nice to hear what Jacory Harris had to say about facing a team that has been in UM's way the last three seasons and intercepted him four times last November in Chapel Hill. 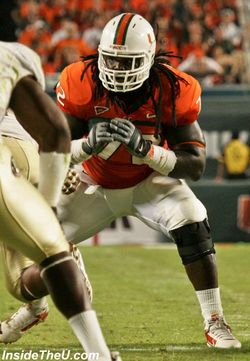 It would have been nice to ask him how he's feeling and why we've seen him standing off to the side on his own during games and not firing up his teammates on the sideline like he usually does.

Hey, at least I know I'm not the only one wondering what Jacory is feeling. Turns out, sophomore offensive lineman Brandon Washington, tabbed as the ACC's Lineman of the Week Monday, is worried about his quarterback too. While most of his teammates answer the 'How's Jacory doing?' questions with what sounds like prepared speeches, Washington provided something a little fresher Tuesday: his heart-felt concerns and some inspiration for J-12.

"Jacory is a very talkative guy," said Washington, who played with Harris at Miami Northwestern and has started at right guard for UM in all six games this season.

"I just want him not to feel discouraged or feel like he's not wanted. When he doesn't make the plays he expects to make, you can see it in his face. He goes into a shell, breaks off and sits by himself on the sideline. That's not how he usually is. Usually, he'll be like 'Line, don't worry about it we got another drive. The defense is going to get the ball back. We're going to score.' He's just kind of discouraged right now."

Harris has been on a steady decline since he threw four interceptions in the loss at Ohio State. His completion percentage is 52 percent -- third lowest among starting quarterbacks in the ACC.  "He just hasn't been having the season he thought he would,' Washington said. "That Ohio State game hurt him."

After that game, Harris received a racially-charged message on his Twitter account. After telling reporters about it a few days later as the Hurricanes prepared to face Pittsburgh, UM coach Randy Shannon decided Harris "needed a break" from the media. He's been unavailable for interviews since.

I'm not in any way trying to say Harris' struggles are related to him not talking to the media. I'M NOT. But while he's been behind the scenes, it is clear Harris has quietly been having a hard time dealing with his struggles.

"Sometimes when he gets in that shell, [we] just to talk to him and say 'Man, we still love you. Come sit by the offensive line, we still love you, nobody hates you here," Washington said. "Once you start talking, he'll usually come out of it real fast, smile, be Jacory again.

"It's not that we need him to be the leader. But he's our quarterback, he's the head man. Lead the troops, lead us to the promised land."

> After getting a first hand look at UM during its 45-17 loss to Florida State, ESPN's Kirk Herbstreit said last week that the atmosphere at Sun Life Stadium had too much of a "corporate feel" than it did a big-time college football game. There's no doubt FSU-UM games had a different feel in the Orange Bowl.

Damien Berry said while the student section has done a good job filling in for what used to be the old West End Zone crew -- being rowdy and obnoxious to the opposing teams, he admitted having fans sit farther away than they did at the OB has brought down the electricity level a bit.

Cornerback Brandon Harris made a great point about what it really takes to make a stadium rock. "I think what made the Orange Bowl special was the team that was playing in the Orange Bowl," Harris said. "That really amped up the crowd. I think the more we progress and the more put together wins, Sun Life will become just as crazy as the Orange Bowl was. It's just a matter of time."

> For those of you rooting to see more of freshman Kelvin Cain at middle linebacker after his stellar debut at Duke, here some news: You will. Just not in the starting lineup. Yet. Colin McCarthy was back practicing with the first team Tuesday at middle linebacker. Word is Cain will rotate in, allowing McCarthy to shift back outside every now and then.

> According to our Barry Jackson, freshman safety Latwan Anderson, rivals.com's 15th-best prospect in the 2010 recruiting class, has left the football team but remains on the track team. A UM source told Barry that Anderson is frustrated but should have known he likely would redshirt this season. UM is uncertain if he will return to the football program. I heard Anderson went off on Facebook over his frustrations of not playing.

> Saturday's win 28-13 win at Duke might have been a good win for some, but count Brandon Harris as someone who expected more. "As you team you want to dominate opposing teams," Harris said. "That was a game we felt like we played well in spurts, but we didn't feel like we dominated that game to the magnitude we were supposed to."

> After the FSU loss, Shannon said he was looking for more vocal leaders. Sounds like safety Vaughn Telemaque is answering the bell. The fact Telemaque has had three interceptions in his last two games has built a little more swagger under his belt, something he admitted he was sorely missing after going his first 15 starts at UM without a pick.

"They've definitely helped me tremendously," Telemaque said. "It's easier to be a leader, be vocal when you've done something. I just feel like I'm back in my groove. I hadn't had a pick in so long, I forgot the feeling of it, seeing the ball in, everything like that."

Several teammates said Telemaque has been a lot more vocal, talking trash to opposing receivers much more than he used to. "I told one of the Duke receivers tell your quarterback to stop throwing it this way," Telemaque said. "I wanted him to get mad and do it again."

> The quote of the day definitely belonged to Damien Berry. When asked what it might take to make UM fans happy, the running back provided some comedy. "I really don't know -- maybe give them some bean burritos after the game," Berry said with a chuckle, knowing full well national titles are all that keeps fans in a good mood. "I love our fans even though they put us up and down. They're with us when were up and sometimes they leave us down. But, it's not about the fans. Its about this family right here."

> Last but not least here is what Shannon had to say about North Carolina:

"The last couple of years have not been good for me or the University of Miami playing North Carolina. We're 0-3. We've had some games come down to the wire. We talked about it as a staff, football team - they have our number right now. We have a chance to do something about it. It's a home game. Watching North Carolina, you see their offense is doing a great job of scoring points and not having turnovers. T.J. Yates is doing a great job. The one thing he's done is stay focused, you can tell by his completion percentage. What he's doing with the offense, it's going to be tough. They run the ball to create passing opportunities for him. They have players that are skill guys. They'll miss the tight end [out with injury], but knowing coach [Butch] Davis they won't change what they do. Someone will have to step up at tight end for them.

"Defensively they have some great players. Their linebacker [Bruce] Carter is one of the best linebackers in the country, probably could have left last year and been a first rounder. You watch those guys on defense, they really fly around and make plays. They do a great job of creating turnovers like we've been doing. Their defense isn't going to do anything deep, will play backed off coverages, will see if we have patience enough to throw the ball underneath. We'll rely on receivers catching the ball underneath, make someone miss and get positive yards, and run the football. When we get opportunities to go deep we will. They're a bend but don't break defense. So it's going to be one of those games. We have to compete in our ACC conference. Coming down the stretch we'll have to play each other. All of us are geared up, ready to go."