Never underestimate the power of continuity and good coaching -- especially on defense. 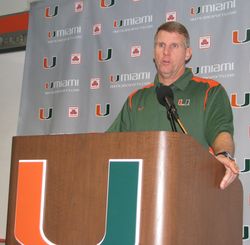 The last time the Hurricanes faced the Seminoles, it was the first time Mark Whipple and John Lovett were calling plays for the University of Miami. Whipple and his high-octane offense was the story everybody was interested in. In the end, though, it was Lovett's defense that had to win the game for the Hurricanes.

After a pass interference penalty on Brandon Harris on third and goal at the UM 3-yard line, the Seminoles were given nine seconds and three shots at the end zone. Somehow, an exhausted Canes defense was able to survive and pull out a 38-34 win.

Fast forward 13 months and a span of 17 games and the 13th-ranked Hurricanes look a little different than they did then. Defense -- no longer quarterback Jacory Harris and his wealth of receivers -- has become the backbone of this team. The last two weeks have arguably been the finest hours in Hurricanes defense since Randy Shannon's days calling the defensive plays back in 2005.

Improved depth on the defensive line and the growth and maturity of talented young players have obviously played a factor. But for senior Colin McCarthy, who has had four defensive coordinators in his five years at UM, having the same boss and the same playbook for the last two years has definitely helped.

"We just feel more comfortable," McCarthy said of UM's defense, which ranks 15th nationally in scoring defense (15 ppg), 12th in total defense, sixth in pass defense, second in sacks, first in tackles for loss -- and who over the past five quarters has created eight turnovers.

"I think maybe what helps us to be great is the way we play together. We're real unselfish. We just want to win and people are willing to do their job. That's what make us good."

McCarthy said Lovett -- and the rest of UM's defensive assistants -- deserve credit for that.

"He's a crazy coach," McCarthy said. "I think the schemes he comes up with, the game plan week to week, the amount of film he and the rest of the defensive coaches watch week to week, giving us a different game plan, helps us out tremendously."

Said Harris: "Coach Lovett is a high energy guy. He has a great personality, jokes with us so well. Everybody knows when it comes down to business, he'll get after you. He's not the type of coach to take a back seat. He'll get in a guys face. Since I've been here, he's gotten in my chest a few times. He's let me know if I don't do what is expected of me, somebody will step up and take my spot. He's just a coach who has no favorites. He just wants to win, put the guys in the position to win and have guys be accountable for their jobs."

> NO VERDICT ON HARRIS' SHOULDER: If you want to know how healthy quarterback Jacory Harris is doing, Shannon said you're going to have to "find out Saturday." 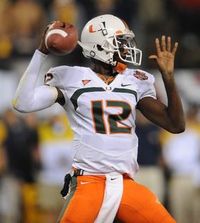 Harris, who took a vicious hit on his left shoulder at Pittsburgh Sept. 23 when he was sacked and driven into the ground, practiced as usual Tuesday morning. But at least through these eyes and a few other reporters who saw him throw a few passes at practice, he appears to be playing with some pain. 790 The Ticket reported Monday Harris could have a torn labrum in his left shoulder.

Harris has been unavailable to the media since before the Pitt game. He completed 13 of 33 pass attempts and matched a career-high with four touchdown passes while also throwing two interceptions at Clemson last weekend.

"Everybody’s banged up, the whole team is banged up," Hankerson said. "We just have to prepared and stay in the training room, keep focused, and not worry about that.”

> It's been awhile since the Hurricanes lost an underclassman to the draft early, but don't be surprised if All-American cornerback Brandon Harris becomes the next one. Harris made a promise to his parents that the one thing he would do before leaving UM was graduate from college. Turns out, Harris, who has been taking classes over the summer and excelling in school, could be done as early as December.

The NFL? Well, some people believe Harris is the second best cornerback in the 2011 class behind LSU's Patrick Petersen. "I can't lie. As a child growing up, that's always been your goal," Harris said of the NFL on Tuesday. "You want to become a professional football player. The older I got, the more realistic that goal became to me being a top recruit and coming to a top university. If I'm fortunate enough that if I'm playing well and I can make that decision, it does make you think about it a little bit. You know your closer to your goals."

> Whether or not Lamar Miller (who didn't participate in contact drills Tuesday) isn't healthy enough to play Saturday, it looks like Graig Cooper could end up stealing a few carries this week. Shannon sounded enthusiastic about Cooper, who hasn't played since the FAMU game in the season opener, when he spoke with our Susan Miller Degnan in the morning. "[Cooper] did a lot of live stuff and is a lot better than he was last week," Shannon said. "The improvement from last week to this week is unbelievable. If he keeps progressing, he has a shot of playing in this game."

> Shannon said Florida State’s offensive line is their team strength and that the Seminoles run a zone blocking scheme similar to when offensive line coach [Rick] Trickett was at West Virginia. "You see a lot of things like the Denver Broncos where they try to reach everybody and cut everyone on the backside and hit them low,” Shannon said.

> Shannon said stopping FSU punt returner Greg Reid could be his team's biggest challenge on special teams this year. Reid is averaging 12 yards per return and has one touchdown. “He is a small guy, but he is a exciting guy," Shannon said. “He is very fast and energetic and we have to do a great job with our flyers on our punt team and covering the field. This is going to be one of the biggest challenges that we have on special teams.”

> Shannon told WQAM's Joe Rose on Monday he went "ballistic" on the team for being lazy during Sunday's practice.  Apparently, he wasn't the only one. Defensive lineman Allen Bailey said he did too. "Yesterday I kind of went ballistic in practice too," Bailey said. "Guys got a little complacent and I was upset about it. They understand last year was the same situation against Virginia Tech and we screwed around and didn’t take it as much serious as we did. I got on a couple guys."

>  According to kicker/punter Matt Bosher, the Canes spent some on Sunday and Tuesday working on on kick and punt protection. Bosher had an extra point blocked and nearly had two punts blocked at Clemson. He had a field goal blocked at Ohio State. "We're doing what we have to do to get better at it," Bosher said.

>The Hurricanes are holding a fundraising drive to benefit the United Way. If you’d like to help: text “MIA” to 864833 anytime from Wednesday through Saturday night’s game against Florida State, a $5 dollar “text-to-give” donation will be made.