Before shifting our attention to Florida State here a few of my final thoughts on the Canes' 30-21 win at Clemson:

HOT TOPICS
> The defense has hit another gear... A week after shutting down Pittsburgh's offense and showing us they're much improved at swarming to the ball and gang tackling, the Canes' defense took it up another notch against Clemson. They forced six turnovers -- by far the most impressive stat in the game. We may not ever get an answer as to when the last time a UM defense created that many turnovers in a game, but it's safe to say it's been awhile. Almost as impressive to me were the quick adjustments defensive coordinator John Lovett was able to make after Clemson found a wrinkle (cutbacks) to have some success running the football in the first quarter. Clemson finished with 162 yards rushing. But aside from his 71-yard touchdown run, Andre Ellington had a grand total of 36 yards on his other 16 carries (2.3 avg). Jamie Harper, who spurned the Canes for Clemson on national signing day 2008, had 57 yards on 18 carries (3.2). Not impressive at all. Kyle Parker? He was 14 off 33 for 149 yards and three INTs. UM broke up five passes, produced three forced fumbles, three sacks and eight tackles for loss. That's great defense. 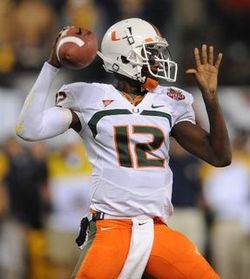 > Will Jacory Harris be able to solve his interception woes? Point the finger wherever you want, eight interceptions in three games is still eight interceptions in three games. Harris' two interceptions Saturday simply weren't good passes. "We always keep saying you can't turn the ball over in the red zone," UM coach Randy Shannon told WQAM after the game. "Aldarius [Johnson] had beat the guy. [Harris] saw it, threw it, it just didn't get there on time. The [first interception] was a break off route. [Harris] went to Travis [Benjamin], who was doubled. [Harris] saw the safety rotate, but the safety rotated to the middle and [Harris] threw it to the weak side. It was kind of disguised and got him. [But] he came back threw a touchdown. Anytime you can do that, you'll be okay."

The Canes were okay on Saturday because they got the win. But how much better could they be if every time Harris went back to pass you didn't have that knot in your stomach? I know his receivers, running backs and tight ends aren't helping him much right now. I counted at least five drops Saturday, which probably would have made his final stats (13 of 33 for 205 yards, 4 TDs) look a little better. But there is just something fundamentally wrong with Harris right now.

790 The Ticket reported Harris could have a torn labrum in his left shoulder. It wouldn't be surprising at all. Harris definitely looked a little more than "nicked" when he took a hard shot at Pittsburgh two weeks ago. There's no doubt in my mind Harris is banged up physically and mentally. He just isn't the same quarterback we saw last year in UM's first two games. And right now, he's worse than the QB who threw for 3,352 yards, 23 touchdowns and finished second in the country with 17 INTs at the end of last year. One way or another the Canes have to figure a way to remedy the situation. Because even though they won Saturday, it was still only by nine points on a day when they're defense forced six turnovers (all in Clemson territory). I mean, how differently would we be talking today if Brandon Harris hadn't made that big fourth down tackle in the fourth quarter at the UM 20-yard line?

> Leonard Hankerson needs to pass along Mark Duper's phone number to the rest of the Canes' receivers... Can you imagine what things would be like if Hankerson had left for pros early? Would the Canes be 3-1 right now? Probably not. Hankerson has been a flat out beast this season. The rest of the Canes' receivers? Not so much. Between the drops, not getting open and just not making plays, the passing game has by far been the biggest disappointment so far this season. Aldarius Johnson had one catch for eight yards versus Clemson. Benjamin had one for seven. LaRon Byrd, meanwhile, did a nice job getting dressed for the game. The production simply has to be a lot better than that. Maybe it's time Tommy Streeter and Kendall Thompkins get a shot at doing more than participate on special teams.

> Sean Spence is making a case for ACC Defensive Player of the Year... Pretty simple: the Canes have the best defense in the ACC at the moment and Spence is the Canes' best defensive player. He had a career-high 14 tackles versus the Tigers and made a vicious hit in the second quarter to force a fumble. As long as he stays healthy and keeps playing at this level, it's hard to give anybody else in the conference the award. FYI, Spence is currently third in the ACC in tackles per game with 9.5. Only Boston College's Luke Kuechly (12.8) and Maryland's Alex Wujciak (11.4) have more. And I've never heard of either of those guys.

> The blocking on field goals, punts and extra points has been suspect... Clemson put an end to Matt Bosher's streak of consecutive extra points made at 105. The Tigers' Jarvis Jenkins did a nice job getting his hand up to get a piece of the ball. What concerns me is that Bosher has now had an extra point and field goal blocked in the last three games. And saturday, Da'Quan Bowers came dangerously close to blocking one of Bosher's punts in the first half. So far, none of the blocks has meant much. But it's obvious the Canes are playing with fire.

> To steal a line from HBO's Bill Maher -- New Rule: Can we please stop comparing players who haven't done anything yet to former Canes greats? Chase Ford is a really nice guy. But he hasn't shown me anything yet that reminds me of Jeremy Shockey. Here are Fords' stats in four games -- 2 catches, 13 yards, 1 touchdown and whole lot of unfulfilled hype. Richard Gordon has 3 catches for 16 yards. Barring some unforeseen changes, we just shouldn't expect much from the tight end position this year.

> Can you imagine how good Ryan Hill would be if he had just played cornerback from the get-go? Two starts, two interceptions and two great games for the fifth-year senior. Brandon Harris is still the best the Canes have at cornerback, but Hill has been very impressive so far. He's helped make DeMarcus Van Dyke better too by moving him to a spot he's obviously more comfortable with -- the third/nickel cornerback.

> For those of you clamoring for more running, less passing... UM attempted 33 passes Saturday and ran it 43 times. Sounds to me like offensive coordinator Mark Whipple and you are already on the same page.

> Seantrel Henderson still has a ways to go... He's going to be a beast by the end of the season, but Mount Henderson isn't completely ready yet to be trusted on his own. Upon further review, I saw he was beaten at least once by DaQuan Bowers on Saturday on the play that led to Harris' fumble and Henderson's fumble recovery. The real good news here is two-fold: One, it is only the beginning for Henderson, Two, senior Joel Figueroa is no longer being asked to do something he can't -- play right tackle. The Canes should be set for the rest of the season with Henderson and redshirt freshman Jermaine Johnson sharing the right tackle duties. There is only room for both to improve.

> The Canes were flagged 12 times for 105 yards -- including three times for kick catch interference on punts. Got to get all of that fixed.

> For those of you still steaming over Clemson's muffed punt turned 15-yard penalty on Streeter, Shannon told WQAM after the game Saturday the rule on a fair catch is that the ball must hit the ground before an opposing team can recover it. That's why officials were apparently able to enforce the penalty on Streeter.