Gameday blog: No. 16 UM at Clemson

CLEMSON, S.C. -- The 16th-ranked Canes open ACC play looking for revenge against Clemson in a high noon kickoff here in Death Valley. Watch it on ESPN2 or listen to it on WQAM.com. Feel free to participate in our discussion below as you tune in.

REWIND: Each of the last three meetings have gone to overtime with the Tigers winning two of the three meetings -- including last year's 40-37 victory at Sun Life Stadium. The last time the Canes played at raucous Memorial Stadium (80,301 capacity), Kenny Phillips secured a 36-30 win in triple overtime with an interception. UM leads the all-time series 5-3. 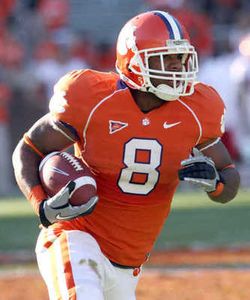 ABOUT CLEMSON: Do-it-all running back C.J. Spiller (who torched UM last season) and receiver Jacoby Ford (who caught the game-winning TD pass last year) are gone for the Tigers. But there are still plenty of dangerous weapons including the bruising backfield tandem of Andre Ellington and Jamie Harper, who are anchoring an offense averaging 215 yards on the ground. Clemson is looking for help at the receiver position, but tight end Dwayne Allen is a dangerous target. He leads all Clemson receivers with eight catches for 156 yards and a score. Quarterback Kyle Parker is coming back from banged up ribs, but still has a solid offensive line in front of him that has only given up two sacks this season. Defensively, the Tigers rank seventh in turnover margin (+5) and fourth nationally in tackles for loss. Safety DeAndre McDaniel had two interceptions last year against Jacory Harris -- including one he took back for a touchdown -- and leads the Tigers defense with 20 tackles. Clemson has two beasts at defensive end in DeQuan Bowers and Andre Branch, who each have three sacks and can create a lot of pressure.

FOR THE CANES THINGS TO KEEP AN EYE ON...
> If Jacory Harris continues to throw interceptions. Whether you blame the receivers for not fighting for the ball enough or point the finger at the quarterback for throwing the ball up for grabs, the Hurricanes can ill-afford to continue turning throwing interceptions. After throwing two picks in the first half at Pittsburgh, Harris only attempted 10 passes in the second half against the Panthers. Most of them were safely executed passes on rollouts. With Clemson expected to dial up the pressure, Harris could end up doing more of the same.

> How much playing time freshman Seantrel Henderson gets at right tackle. The Canes gave up two sacks last week at the right tackle position between senior Joel Figueroa and redshirt freshman Jermaine Johnson. UM coach Randy Shannon said Henderson, who came in on goalline situations and third and short running situations a week ago at Pittsburgh for eight plays, will see more time this week in special packages. But if Johnson and Figueroa struggle, Henderson might be forced into more action. Either way, this was the No. 1 question on the offense coming into the season. It's important for the Hurricanes to sure up this position moving forward.

> The discipline of UM's swarming defense. Clemson's offense is predicated on keeping defenses off balance with mismatches and passes against the grain. Parker loves to scramble backwards and drawing the defense in before throwing the ball back across the field to his running backs and tight ends. The Canes, who lead the country in tackles for loss and rank second in sacks, have to do a good job not over pursuing, staying disciplined and making good, solid tackles in the open field.

MY PICK: Death Valley can be a really difficult place to play considering how loud it gets. But the Hurricanes aren't a young team anymore and their offense is not predicated on making too many adjustments at the line of scrimmage. That being said, Clemson has a tremendous amount of talent and I wouldn't be surprised if we see these two teams meet again in the ACC championship game. But this Saturday, I'm going with UM. I can't see Jacory Harris making the same mistakes he's made the past couple of weeks. If Harris wouldn't have turned the ball over three times last year UM wouldn't have lost to the Tigers a year ago. As long as he keeps the picks down, the Canes should win. Clemson's offense isn't as good as it was a year ago and the Canes defense is better than it was a year ago. I think the rematch will be a much better game. UM 35, Clemson 20.

Reminder for Gameday blog participants: Participation in the Cover It Live program is intended for the exchange of meaningful questions and observations during the game between fans and reporters. Not all comments or questions will be posted. iPhone users are asked to be patient as it takes several minutes for Cover It Live to load.