MIAMI GARDENS -- The 25th-ranked Canes will try to end a three-game losing streak to North Carolina and avoid taking a huge step back in the Coastal Division race. Kickoff is at 7:30 p.m. at Sun Life Stadium where a crowd of at least 40,000 is expected. Watch it on ESPN2 or listen to it on WQAM. Feel free to participate in our discussion below as you tune in.

REWIND: As mentioned earlier, the Hurricanes haven't beaten North Carolina since 2006 and the Tar Heels own an 8-5 edge all-time in the series. The Hurricanes lost 33-24 last year in Chapel Hill and dropped a 28-24 decision the last time the teams met in South Florida. 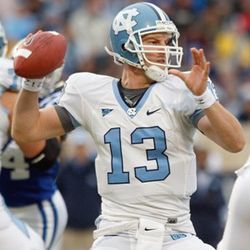 ABOUT CAROLINA: The Tar Heels opened the season with a pair tough six-point losses to LSU and Georgia Tech before picking up wins against Rutgers 17-13, East Carolina 42-17, Clemson 21-16 and Virginia 44-10 in the past month. While the team was obviously rocked by the suspensions and dismissals of several key defensive players, quarterback T.J. Yates has kept Carolina in the hunt. He owns the lowest interception percentage in the country (1 INT) and has completed nearly 67 percent of his passes for 1,495 yards and 11 touchdowns. His favorite receiver, senior tight end Zack Pianalto, was knocked out for the season last week at Virginia. But receivers Dwight Jones (19 rec., 302 yards, 3 TDs), Erik Highsmith (14-205-2) and Jheranie Boyd (12-297-3) are all capable targets and big play threats. Carolina's running game, led by Johnny White (86 att., 464 yards, 4 TDs) and Shaun Draughn (63 att., 287 yards, 4 TDs), has averaged 164.7 yards a game over their last three. Defensively, the Tar Heels live off turnovers. They've forced 16 this season (11 interceptions, 5 fumbles). Where the Tar Heels are vulnerable is against the run, where they currently rank 9th in the ACC.

THINGS TO KEEP AN EYE FOR THE U...

> As usual, turnovers... We keep trying to figure out the identity of this team. Not sure why. It's obviously turnovers. When UM's defense is forcing them and quarterback Jacory Harris is avoiding them, the Canes have a real good chance to win. Last season, Harris threw four picks against North Carolina and lost. I think the magic number for Harris and the Hurricanes to have a chance to win this week is plus-2 (as in turnover margin).

> How much action the true freshmen see... Last week at game, Kelvin Cain started at middle linebacker and had a stellar game. Tight end Asante Cleveland came in late for Chase Ford and got open for two catches. Seantrel Henderson started his third straight game at right tackle and played the entire game. Receiver Allen Hurns had one pass thrown his way last week. It will be interesting to see if all four get more or fewer opportunities this week. Personally, I'd like to see more of them. We've already seen what the other guys can do.

> Red Zone and third down efficiency... As documented in my story earlier this week, the Canes offense has been dreadful in both categories this season. Carolina ranks sixth nationally in red zone offense and fourth in red zone defense. The Tar Heels are average on third down, though, ranking 70th on defense (40.0%) and 72nd on offense (38.8%).

> MY PICK: UNC 30, MIAMI 21. You want to believe this game would be the turning point for Miami -- especially against a UNC team hurt by the loss of so many key returning players. But there is nothing I've seen from the Canes -- outside of the defense's ability to create turnovers -- that has really impressed me this season. And North Carolina doesn't turn the ball over. It's like all of the Tar Heels' strengths are the Canes' weaknesses. I think UM will come to play tonight (unlike FSU and Duke). The sad thing is I just don't believe it will be enough.

Reminder for Gameday blog participants: Participation in the Cover It Live program is intended for the exchange of meaningful questions and observations during the game between fans and reporters. Not all comments or questions will be posted. iPhone users are asked to be patient as it takes several minutes for Cover It Live to load.