« Gameday blog: Miami at Duke | Main | Rogers decommits, could Bridgewater be next? »

The University of Miami got back on the winning side of things Saturday with what could best be described as an unimpressive 28-13 win at Duke. Quarterback Jacory Harris finished the day 17 of 34 for 224 yards, 1 touchdown pass, 1 touchdown run and no interceptions. 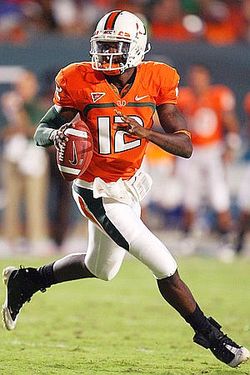 It was the first time since the season opener Harris didn't throw an interception -- a span of four games. It was also the first time since the Pittsburgh game he completed at least half of his passes. Harris has been under a lot of scrutiny this season for his inconsistent play. So, this week, after watching a replay of the game on ESPN360, I charted every single one of Harris passes to try and gauge where he's having success and where he's struggling.

There's no question Harris caught a few breaks Saturday in Durham. He had six passes batted away, including four that could have been intercepted. But of his 34 attempts, aside from the six that bounced off defensive backs hands, only three others were uncatchable. His receivers, who had 30 passes dropped in his first five games, dropped at least five more against Duke. As you know, offensive coordinator Mark Whipple likes to throw the deep ball. Harris attempted 11 of those passes Saturday and completed only three of them for 93 yards. Harris had a lot more success throwing short passes (under 10 yards), completing 11 of 14 for 84 yards.