Rogers decommits, could Bridgewater be next?

Miami Northwestern receiver Eli Rogers told me Wednesday his dream is to spend the next four years catching passes from his best friend Teddy Bridgewater. Now, it looks like that might no longer happen -- at least at the University of Miami. 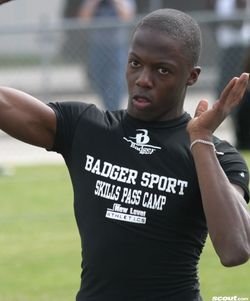 Sunday, the 3-star receiver told Canesport.com that he has decommitted from the Hurricanes and he's reopening the recruiting process.

"I'm open to any colleges that want to talk," Rogers told Canesport. "Coaches know about [the decommitment]. They said they can understand my reasoning and that they're still recruiting me and still see me the same. I told them I just want to open back up my options and they said they're cool with it."

No word yet on whether Bridgewater, one of the nation's top high school quarterbacks and the only QB in UM's 2011 signing class (at the moment), will do the same.

On Wednesday, when I drove to Northwestern and spent about two hours watching practice, Bridgewater told me he was still planning on being a Hurricane. But he also said he was a bit disappointed by the Florida State loss and what he's seen from UM's offense this season. He also admitted he's been having second thoughts about his commitment.

"I’ve been paying close attention," said Bridgewater, who went to the UM-FSU game. "The season is going good so far. But it could be better. They have to improve in some areas.

"More can be done in the offense. I paid attention to the Florida State game. Third and 10, Third and 8, they came out unbalanced. I’m just asking myself 'What’s going on? Why aren’t they opening the offense at this point of the game?'"

Bridgewater also said he's been paying close attention to the way Jacory Harris has been struggling and the way he's been criticized by fans and the media.

"I’ve been paying close attention to that," Bridgewater said. "That’s the one thing that stands out. It’s something to think about. The way he’s playing, the way he’s been treated, everything. He’s playing good. The wide outs have to help him also. I talked to coach. He said the past five games the wide receivers have dropped 30 passes. That will bring a quarterback’s confidence down.

"From what I’ve seen, I would like to come in and play – or push Jacory at least," Bridgewater said. "I think that’s the one thing he’s missing. I think he feels like he has no one there to push him. He might be a little relaxed or something. That’s one role I’d like to play."

Bridgewater said a number of schools have continued to recruit him over the past few months including the University of Florida, South Florida, Louisville, LSU and Michigan.

"All of them want me as a quarterback," said Bridgewater, who at times has been dubbed by some recruiting analysts as a better receiver than passer. "I’m paying attention to everything. It’s like the whole recruiting process is rebuilding. At one point, I thought it was over. Now, more teams are showing interest."

Stay tuned. I'm guessing this story is far from over.