Secondary to none: UM DBs have answered bell

Outside of what Brandon Harris accomplished during an All-ACC sophomore season in 2009, there were still plenty of questions surrounding the University of Miami's secondary entering the season. For instance: 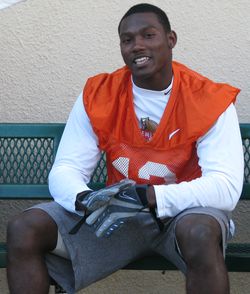 > When would redshirt sophomore Vaughn Telemaque finally start delivering the big plays and turnovers he was known for in high school?

> What would the Canes be able to get out of fifth-year senior Ryan Hill, a player coming back from injury and who hadn't played cornerback since high school?

> Would senior DeMarcus Van Dyke and sophomores Ray Ray Armstrong and Brandon McGee take the next step? Would the Hurricanes have to count on former walk-on Corey Nelms to fill some big shoes?

Safe to say, the Hurricanes have answered the bell. After ranking 46th in pass efficiency defense last season, UM enters Saturday's game at Virginia (3-4, 0-3 ACC) with arguably the best pass defense in the country. The numbers are eye-opening:

> Not only does UM rank No. 1 in pass efficiency defense, they've given up the fewest passing touchdowns in the country (3) and opposing quarterbacks are completing less than half of their pass attempts (49.5 percent). Only three other teams have accomplished the latter feat: Nebraska, UCF and Buffalo.

> The Hurricanes 14 interceptions are tied with Ohio State for second most in the country and only one behind national-leader Alabama (15).

> To date, the Canes have only given up two passing plays of 35 yards or longer -- both against Ohio State.

"Holding an opponent to 150 yards a game is our goal every week," said Hill, who emerged as the team's other starting cornerback with Harris and is as big a reason as any why the Hurricanes' secondary is much improved.

"We try not to let any ball get over our heads, that's something we take in the secondary very seriously. Coach [Wesley] McGriff does a good job of reminding us we don't want any balls over our heads. For a couple years now, this is probably the best year of guys coming together, corralling and saying we're not going to give up any deep passes, we're not going to let receivers catch passes or let quarterbacks pick us apart. If we can do that, we feel we can help our defense out and our team. We feel like we're one of the strongest units on the team."

UM coach Randy Shannon what has made the secondary really special is how much it helps in the run game, too. "You watch them play, they play with a lot of enthusiasm, a lot of excitement," Shannon said.

"Ryan Hill has been put in a lot of one on one situations, come up with big plays. [Demarcus] Van Dyke has come up with big plays compared with what he did in the past. And also they're getting physical in the run game. You really don't get too many corners that want to play the run and pass. They really get on each other in practice about being physical. When you have that as a coach it makes things a lot easier. If you have a shutdown corner, then when they start motioning in, now the corner has to go in and be the tackler. They're not afraid of doing that. They really have a lot of confidence in the way they're playing. I think they see that by the defensive line doing what they do, they have to respond."

> The reason I brought up UM's pass defense today is because they figure to face a pretty good challenge from Virginia. The Cavaliers own the second-best pass offense in the ACC (255.1 yards per game) and have the second-best defense in the ACC as well. The Cavaliers have thrown for 11 TD passes this year -- three more than all of last year. Leading receiver Kris Burd (5-11, 195) has made 32 catches for 472 yards and 4 touchdowns -- including a pair of 50-yard grabs. Matt Snyder (6-4, 205) has 14 catches over his last 3 games.

> If there is an unsung hero in UM's secondary, its junior JoJo Nicolas, who has started the last three games at safety alongside Telemaque. Shannon has used Nicolas in the rotation with Armstrong for a reason: it allows the sophomore time to pick up what he's doing wrong on the sidelines and then go in and do it the right way.

"Whoever practices the best is who we're playing," Shannon said of the safety spot. "When you have that competition, you keep that thumb on them a little bit more, it keeps the competition going. It's been good to watch them practice and compete."

> The Hurricanes have played 18 redshirt freshmen and true freshmen this season and several outside of OL Seantrel Henderson, RB Lamar Miller and OL Brandon Linder have contributed in big ways.

The reason freshmen receiver Allen Hurns has earned playing time over other veteran players is his blocking and effort on special teams. "Allen Hurns has done a great job on kickoff return, the flier part of it," Shannon said.

"It isn't what he does as far as catching, routes. Allen Hurns, his job last week was run some routes, and when we need you, block those safeties. Those 200 yards rushing last week, a lot had to do with Allen Hurns getting downfield. He's contributing that way."

Linebacker Kelvin Cain had his big day at Duke, starting in place of Colin McCarthy. Cain, like tight end Asante Cleveland, was an under-the-radar star from California Shannon was able to recruit to Miami through a tip from Ronnie Sims, a friend Shannon grew up with who coaches Junior College football.

"Kelvin Cain and Asante Cleveland were probably guys you never heard of," Shannon said. "We made the decision on taking those guys, because those guys are what's best for the University of Miami and this football team and not what everybody may think [star rating wise]. Kelvin came in against Duke, started, did a great job. He's on kickoff team and our score team now.

"Asante comes in an emergency, catches balls against Duke. He made two big catches [last] week against North Carolina on third down and fourth down. You have to have guys like that come in and really contribute. If mentally and physically you can handle it, you can play at the University of Miami. It's not always athletic ability. Physically and mentally, if you can handle it you can be successful."

> If there's a reason we're seeing more production from Allen Bailey lately its probably because he's not bouncing around all over UM's defensive line. "I've only been playing one or two spots since the Pittsburgh game I believe," Bailey said Tuesday. "I have the rhythm of it now and know what to expect."

Back home on Sapelo Island, Ga., Bailey does a lot of hunting. But here in South Florida, he says, he just doesn't have the time. "When I go home I do," Bailey said of hutning. "I hunt small game, raccons or possum. We might go hunting for hogs every now and then, but that's early in the morning. We use a gun, not bow and arrows."