Clemson safety DeAndre McDaniel didn't have the type of game he was hoping for against the Hurricanes last Saturday. The All-American blew coverage schemes and was torched by Canes receiver Leonard Hankerson on 22- and 65-yard touchdown catches. 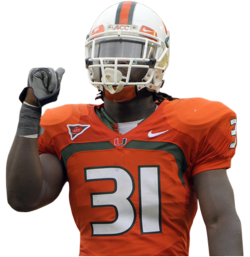 But that wasn't the worst part of McDaniel's day.

According to a story in The Charleston Post and Courier, McDaniel had four teeth knocked loose after taking a helmet to the facemask by an unnamed Hurricanes player. So who delivered the big blow? We might not ever know (I've got a hunch it was running back Damien Berry).

But the topic got me to thinking -- who does deliver the biggest hits on this Hurricanes team? Sophomore running back Mike James didn't hesitate when I asked him. In fact, he didn't even let me finish the question. "Sean Spence," James said. "The Cobra."

"After that, I'd say Allen Bailey, Colin McCarthy ... [after a long pause] Then, I'd go with Andrew Smith."

> Junior Andrew Smith might be one of the most efficient sack artists in the ACC. Smith has three sacks this season for the Canes in three games. What's really impressive? With Marcus Robinson back, he said he was only in on 10 defensive plays Saturday at Clemson.

> I'm expecting the Seminoles to know where Hankerson will be at all times Saturday. During Wednesday's ACC teleconference, Florida State coach Jimbo Fisher didn't sound like a coach who is planning to let Hankerson run wild in the secondary.

"He's a complete receiver," Fisher said of Hankerson. "He's unique in that he has great size and speed, will go over the top of you, run away from you. But at the same time he's a great route runner. He can stick his foot in the ground, has shake, can run with the ball after he catches it, understands where the holes are, how to set zones. He is an extremely tough matchup. You never stop guys like that; you just hope they don't kill you totally. He's a complete player and we're going to have our hands full with him."

> Count former Hurricanes offensive tackle Leon Searcy as a fan of Seantrel Henderson. Searcy, who hosts the show Canes4Life on CBS-4 Saturdays at 11:30 a.m., told me during the show's filming tonight the 6-8, 355-pound true freshman impressed him.

"He's got all of the raw materials to be a great one," said Searcy, who spent 11 seasons in the NFL. "I thought he did a real good job on his kick outs. He had a couple guys get around him, but overall I was very impressed."