Not only will the University of Miami be without starting quarterback Jacory Harris on Saturday against Maryland, the Hurricanes will be without their No. 1 running back. 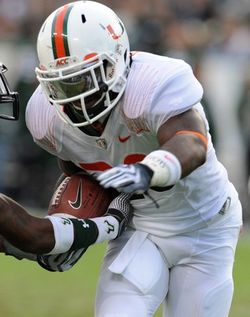 Berry practiced neither Tuesday nor Wednesday. Shannon said Berry needed time to heal, though he wouldn't specify the injury. Berry is the fourth-leading rusher in the ACC, with 690 yards and four touchdowns on 142 carries. Last Saturday at Virginia, his streak of consecutive games of at least 100 yards ended at four games. He didn't carry the ball in the fourth quarter

Lamar Miller and Mike James likely will get the bulk of the carries, with Graig Cooper and Eduardo Clements available as well.

``He's just getting healthy,'' Shannon said of Berry. ``He was sore, banged up and stuff. He's been banged up for about maybe the last 2 ½ weeks. You know what? You just can't keep trying to keep going and going and going. It gets tough on him.

``I don't [want] to make it get worse than what he is. He's already kind of nicked up. Precautionary measures and stuff like that. We've got backs right now, so our numbers are OK.''

Miller has gained 252 yards and two touchdowns on 46 carries. James has 243 yards and one touchdown on 41 carries. ``I feel very good about getting the opportunity,'' Miller said. ``All the running backs have to step their games up and be ready to play and be hungry about it.''