They came in together as the No. 1 recruiting class in the country according to ESPN. The 2008 University of Miami signing class was supposed to be the group that led the Hurricanes back to prominence. 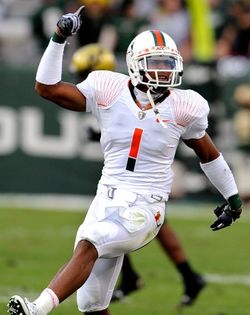 But nearly three season in, the results (22-12) haven't matched expectations. Before the Hurricanes (6-3, 4-2 ACC) practiced Tuesday, cornerback Brandon Harris, one of the few players in the class to deliver on the hype, talked about why he thinks his class hasn't delivered enough.

"Being young and immature to the college game, we kind of fed into [the expectations]," Harris said. "We didn't sit down and think about the process that it would take for us to become great college players at that time. We just thought it was automatic. We were good in high school so we thought this is what's going to happen -- we were going to be stars as soon as we walked on campus. We didn't sit back and look at it and say 'OK, we're going to have to work, we're going to have to step it up to another level.'

"It's a different atmosphere, different guys. A lot of us learned that in our freshman year. We bounced back and put together some good games. But we have to finish of our careers here doing well. But just coming in, I think a lot of us did expect more things to come sooner than it did happen."

Harris thinks a lot of the players in his class -- including himself -- may have benefitted from a redshirt season. But with the Hurricanes in need of playmakers, many of the 2008 members played right away.

"Some us were when we came in we were put into a position where we had to play, there was no opportunity to redshirt," Harris said. "When you redshirt, it's just a chance to learn and go through college and stuff like that. It benefitted a lot of guys in their careers. With our class, it got to the point in the program where we lost a huge class and we were transforming over. Most of us had to play that first year. Ever since then we've still been in the fire. We've had guys suffer some injuries, little setbacks here and here. We're still trying to put together that class. We're all trying to get together before we leave out of here and snap that book."

"A lot of people may blame it on staff for why people are progressing or aren't progressing, but a lot of people don't look at guys who are making jumps in their career," Harris said. "You look at guys like Sean Spence. He came in as a freshman. Played great for us on defense, made a lot of great plays. Then, he started great last year, suffered an injury and was out for five or six games. That hurts a guys progression. He was fortunate to bounce back this year."

"But we've been unfortunate too. We really feel it has to do a lot with -- and I probably shouldn't say this but I don't care -- people don't feel comfortable with our coach at this point. Any little thing, they want to make it an issue. Everybody in this class, they understand that. We're Randy Shannon's guys. He was the reason we all got together and said we're coming to Miami to play for Coach Shannon. We still want to put together a solid class being his first true class -- to kind of silence all [the critics] for a change.

"A lot of people don't realize how great of a coach he is. He does everything in his power to put this football team in a position to win. As a team, we just have to get together and dedicate the rest of this season to him and making him look like the coach he's supposed to look like because of the work and effort he's putting in. He's not the type of coach to throw anybody on the hot seat. He's a standup guy who is going to take all the blame and criticism to himself because he's the head coach. But obviously we as players we have to make plays. In sports, when players make plays it's because they're players. But when they don't make plays, they look at the coach. The coach never gets the credit. But they get all the criticism. We don't understand it and we don't like it as a team. We feel the only way to kind of give our head coach some praise and relaxation is to fight for him and not let him down. It's bigger than just winning football games at this point. It's about showing how much we love him and support him on the football field. And the only way to do that is to win on the football field."

Here's a look at what the 2008 class has accomplished since arriving at UM player-by-player. Note rankings based on Rivals star-rating: