« VIDEO: Canes' seniors talk before USF game | Main | USF Series will not be continued beyond 2013 »

The Miami Hurricanes may not have much left to play for this season outside of matching their record from a year ago and picking up their first bowl victory since 2006. 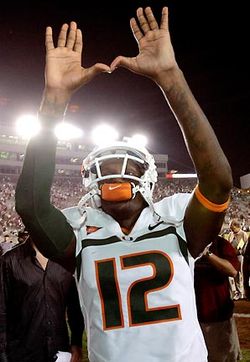 But for Jacory Harris and Stephen Morris, Tuesday's practice was really the official start of what should be a back-and-forth quarterback competition -- one that probably will not end until the week before UM begins the 2011 season next September. Although coach Randy Shannon said this week Harris would be the starter Saturday if he can show he's back in a rhythm with the offense during practice, I don't expect Shannon to just hand the job back over to the junior permanently. In fact, NBC-6's Adam Kuperstein said a source told him Morris was told Monday night he will start against USF.

Ultimately, Shannon knows very well the best thing for Harris and Morris is a healthy competition. And the fact Morris (50.5 comp pct, 880 yards, 5 TDs, 7 INTs) played pretty well when Harris (53.9 comp pct, 1646 yards, 14 TDs, 11 INTs) was out, I've been told, has convinced Shannon to leave the quarterback competition open heading into next season. When Shannon spoke on the ACC Teleconference Tuesday what he said seemed to support that belief.

"This is the first time I think since Robert Marve was here that he’s had somebody to push him where he needs to go,” Shannon said. “With Stephen there, Stephen and him talk a lot, they communicate a lot. It’s a competition factor of him staying on top of his game but also ... not feeling the heat, just knowing you have somebody by you that’s just as good as you that wants to work just as hard as you. I think it’s been a great cohesive deal between those guys that should really work out well.”

For what it is worth, Morris took all of the first team snaps when we were able to watch the first 15 minutes of practice Tuesday -- a sign Shannon clearly wants Harris to earn the job back. 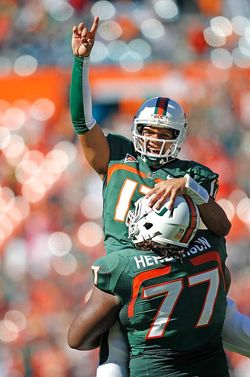 One thing Harris did that impressed Shannon as well as his teammates was that he kept coaching Morris while he was out -- something that won points all around after Harris was seen at times this season off on his own.

"Even though he wasn’t playing, he played a valuable role," senior running back Damien Berry said. "Jacory was coaching on the sideline. He was telling Stephen what he did wrong, his reads and what he saw, critiqueing him from the sideline. Jacory is a big part of our team. Stephen is also, whether on the field or off the field. Both of those  guys are great. I love the way Jacory hasn’t been selfish or anything. He stepped up and he was a real leader, showed how much he cared about this team being on the sideline coaching."

Berry believes that if Harris had real competition from the beginning of the season, he might have been better off and perhaps more focused. "That’s the goal, to put you into that fire and see how you come out," Berry said. "Some people break, some people fall. But most of the time, if you’re here, you’re going to step up to the plate."

> With 262 yards rushing against Virginia Tech, the Hurricanes have climbed up to No. 25 in the country in rushing (192.73 yards per game) and are on pace -- with what they've accomplished over their last six games -- to eclipse the school record for rushing yards in a season (2,558) set in 1954. As it stands, UM's 2,120 yards on the ground already rank 10th all-time -- behind five glorious season from 2000-2004 that featured Willis McGahee, Clinton Portis, Frank Gore, James Jackson and Najeh Davenport.

> Between Harris (11), Morris (7), Spencer Whipple (2) and A.J. Highsmith (1) the Hurricanes have thrown more interceptions this season (21) than they have thrown touchdown passes (19). Of course, 12 of those TD passes have been caught by Leonard Hankerson (a new school single-season record). FYI, the school record for interceptions thrown in a season? 32 set back in 1944. Jacory Harris, who has 35 career INTs, is three picks shy of tying George Mira's school record of 38 (1961-63). 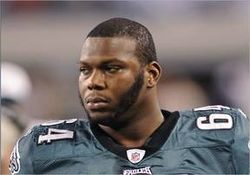 > Left tackle Orlando Franklin said he will be spending Thanksgiving with his mom and former teammate Antonio Dixon, who has gone from undrafted free agent two years ago to starting five games for the Eagles this season. Franklin said he actually sent Dixon a funny text message last week as he watched the Eagles-Redskins Monday night football game.

"I was surprised he didn't stutter the other night when I was watching Monday Night Football. He actually said 'Antonio Dixon, The U.' I made sure I called him and left him a message about that," Franklin said of Dixon, who battled a severe stuttering problem when he was at Miami Booker T. Washington High and at UM.

"He called me right after the game and cussed me out. It's all good. I'm happy for him. He just has to continue doing what he's doing."

As for his career at UM, Franklin said: "I definitely think I had a real good career. But really it's all about wins and losses. People are not going to see anything else. I remember last year, people telling me I had a great game against South Florida, but I had a horrible game against Wisconsin. Well, grade-wise I had a great game versus Wisconsin and a horrible game against South Florida. It's all about wins and losses here."

> The consensus among players as far as the most disappointing moment of the season? That was pretty easy, Virginia.

"Losing is one thing," cornerback Ryan Hill said. "You go into games with expectations of a win. But when you take a game like Virginia, you lose to guys you know you shouldn't lose to. I kind of stomach Florida State and Ohio State -- these guys are among the nation's elite just like we are. But to lose to Virginia, that's one game that really stuck out to me. I didn't have any answer for it. I don't really understand how we lost that game."

> Hill, to me, has been the most pleasant surprise of any senior on the team. He basically went from a receiver in Shannon's dog house to the second-best cornerback on the team as a senior. He's also a great, great interview.

When I asked Hill about being in Shannon's doghouse, he said: ""I wasn't in his doghouse, I was in his kennel. Coach Shannon wouldn't even talk to me. Coach Shannon, we'd pass by each other and he'd look at me - `uhhh.' We've grown and I love him to death. I'm sure he loves me and we talk all the time. There's not a thing I wouldn't do for him and I'm sure he feel's the same way."