This weekend was only the first couple days in what will probably be a stretch of a long days and nights for reporters covering the Miami Hurricanes. So, please bear with us.

With all of the reporting and rumors to chase, I didn't get a chance to come back and share some thoughts on what I've been hearing and thinking in the aftermath of the firing of Randy Shannon and the coaching search. Here are a few things on my mind: 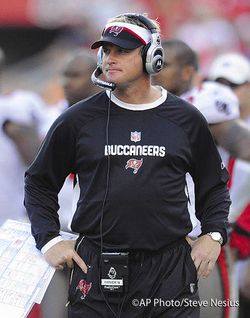 > From the get-go, all of this Jon Gruden talk (heard it last week) seemed like a stretch to me. Why would a coach who has won a Super Bowl, has a Monday Night Football gig and potentially a lot of big-time offers to get back into coaching at the NFL level take a college job when he hasn't coached at that level since 1991? But the reporting -- and tweeting -- we've done since yesterday on what we were hearing is legit.

There were credible sources telling us (not only me) that Gruden and UM have had mutual interest for awhile and that money and a framework of a deal has already been discussed. A few other sources were saying it was done and a press conference was already in the works for Monday. Obviously, the latter didn't happen. No credible sources or officials at UM confirmed it. In fact, other sources -- as the night went on -- began spinning the story in the other direction. So, we didn't write a story saying that. But I strongly believe from what I heard, Gruden and Miami have been talking for awhile (before Shannon was fired) and numbers of a potential deal have been exchanged.

UM was -- and probably still is -- holding out hope they can land their dream candidate. If they do, it's because they go all-in and meet all of Gruden's demands (expensive staff, etc) as former Cane Dan Morgan told me Sunday morning. As for his "denial" on ESPN? There have been a lot of coaches who have left for jobs making similar denials and telling their current bosses what they want to hear as they negotiate.

For Gruden, Miami is attractive on several fronts. He can pull a Pete Carroll and go back to coaching at a level where the head coaches are the real superstars. And, he would be given full control of football operations -- bring in people like his brother if he wants and friends. The question is will Miami really pony up all that cash for the big prize? If UM is smart, it will. The Canes have already done the research of the economic impact Gruden would have in terms of season ticket sales. Plus, there is the money donors and others have promised should UM snag a huge fish like Gruden. If UM wants to be relevant right away and "hire the best coach to take them to the pinnacle of college football" as Kirby Hocutt said, Gruden is that guy.

The most likely scenario -- in the end -- is UM ends up landing a lesser high-profile coach than Gruden, who can pretty much choose wherever he wants to go. But I'd still hold out hope over the next 48 hours. If it doesn't happen by then, UM will probably move on. As I said earlier, I think the talks with Gruden have been going on for weeks. The money and particulars is what has been discussed over the last 24 hours (since Shannon was fired). > So who else is UM really looking at? Here is who I believe based on what credible sources have told me and other reporters here at The Herald who have covered UM in the past: Montreal Alouette's coach Marc Trestman (former UM offensive coordinator); Georgia's Mark Richt; former USF coach Jim Leavitt; Texas Tech's Tommy Tuberville (he was the hot name last year for UM); Mississippi State coach Dan Mullen; and UConn's Randy Edsall.

Yes, Richt said Sunday he has no interest in leaving Georgia. But he just had a 6-6 season. He played at UM and may be able to be sold on the come home and be a hero scenario. And if UM is really going to pony up big cash -- we heard upwards of $3 million per for a coach it really wants -- then why wouldn't he at least listen?

To me, the most intriguing potential candidates are Mullen and Edsall.

Edsall, 52, has been at UConn since 1999 and has made a basketball school excited about its football program. He's only 69-69, but the Huskies have been really competitive without much of a recruiting base. They shared the Big East title in 2007. Edsall makes $1.3 million a year.

I just think those are long shots at this point -- Petersen and Patterson especially since they're teams have obviously done so well and are ranked high in the BCS. But I wouldn't be surprised to see UM go after the them if given a warm reception. I've heard Leach's name from a few sources. But my gut tells me his ugly departure from Texas Tech has him a little tainted and UM probably wouldn't go after him unless they completely strike out with others.

> As for Shannon, I truly believe the decision to fire him was probably made after UM's losses to Florida State and Virginia. The Hurricanes became irrelevant after the Cavaliers loss and from all indications, that's when Hocutt began to start looking into replacements.