Stephen Morris might not be the Hurricanes starting quarterback much longer, but he'll always have fond memories of his first start. 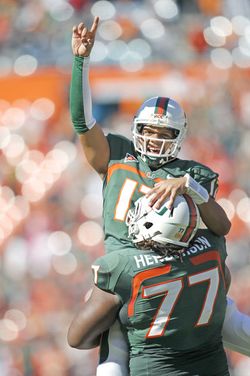 Monday, the 6-3, 209-pound true freshman earned ACC Rookie of the Week honors for his performance against Maryland. He completed 18-of-30 passes against the Terrapins and none was bigger than the final completion for a 35-yard touchdown to Leonard Hankerson with 37 seconds to play. The touchdown pass gave the ‘Canes a 26-20 win and capped an impressive debut for the rookie. Morris threw for 286 yards, a single-game high for any UM quarterback this season, and also rushed for 13 yards. He also threw two interceptions, one that was returned for a touchdown.

Moments after the come-from-behind win, UM coach Randy Shannon said there wouldn't be a quarterback controversy and that once Jacory Harris is cleared to return from his concussion he would retain his starting spot.

Morris, though, is expected to start Saturday at Georgia Tech.

“We sat down and said, ‘OK, what is he comfortable with throwing?’ We went back and watched the films in camp and the things in practice, the throws he was comfortable with throwing and those are the throws we went into the game with and the offense we went into the game with," Shannon said. "It was quick throws, getting the ball out of his hands, but also we threw some deep balls off of play action because our running game was going so well. That’s really big when you have a chance to do that.”

> Kickoff time for the Hurricanes-Virginia Tech game will be at 3:30 p.m. The game will be televised on either ESPN or ABC. UM will wear its special Nike Combat uniforms.