With critics like WQAM's Sid Rosenberg calling for his firing after Saturday's loss at Virginia, I asked Hurricanes coach Randy Shannon Tuesday why he thinks many people feel his team is underachieving. He gave me what I felt was a long, honest answer. 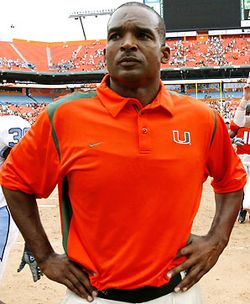 "We just don’t have that consistency," Shannon said. "You used to watch defensive players play consistent. Every week you knew this guy was going to be there, make something happen. We’re just not getting that consistency right now and I don’t know why.

"It’s like one of the experts said to me the other day, ‘Everybody has their identity.’ A lot of people are trying to force this team to be something that was happening in the past. Everybody says you have all this talent. But Mike Irvin is Mike Irvin. Andre Johnson is Andre Johnson. Santana Moss is Santana Moss. You can’t compare those guys to anybody on our team right now. Everybody is trying to compare these guys to those guys. But why? Because everybody is hoping that’s what they end up being.

"Travis Benjamin is unlike anybody we’ve ever had here. He’s a thin kid that can run fast. I’m happy we got him and he’s doing well. But he’s not what everybody wants him to be. He’s not Santana Moss. Santana Moss was fast, thick, big – they’re totally different. Let’s talk linebackers. Everybody thinks Colin [McCarthy] should be like Dan Morgan. Two totally different guys. Body structure is different. Everything is different.

"To me, it’s depth. We just haven’t been able to get there yet. If you look at our offensive line, we’re playing three freshmen – Jermaine Johnson, Seantrel Henderson and Linder. It’s crazy. They are pretty decent. They’ve given up maybe 12 sacks, compared to 35 when we had a bunch of veterans. Now, after them, it’s still a bunch of freshmen.

"We have depth at certain positions. You look at the guys playing well – like defensive backs. You wonder why they’re playing well. They’ve got somebody behind them that’s old, been here. You have a [DeMarcus] Van Dyke, Ryan Hill, Brandon Harris, you got some people behind them that is going to push them.

"Defensive linemen, it all depends on whose healthy. When we’re healthy, they’re all playing unbelievable. When somebody has to sit out two games, a guy has to add more. When you go 35-40 plays a game and all of a sudden you go up to 65, you’re just a different person. It's consistency and depth."

"I'll be their biggest fan for the first time in my life this Thursday night," receiver LaRon Byrd said of Georgia Tech. "But we just can't rely on them, we still have to do what we have to do. We definitely know now, one more slip up and we're out of the ACC picture. We have to handle our business."

Since the ACC created a championship game in 2005, the winner of Thursday's game has gone on to represent the Coastal Division. Virginia Tech has done so three times -- 2005, 2007 and 2008. Boston College, which came to the ACC from the Big East along with UM and Virginia Tech, has played for the ACC title twice. The Canes of course have never played in the ACC title game.

> When Taylor Cook and Cannon Smith transferred out before the start of the 2009 season, the Hurricanes were left without a viable backup quarterback. A.J. Highsmith, a true freshman at the time, played the role behind then sophomore Jacory Harris. I asked Shannon Tuesday if the Hurricanes ever bothered to look for a Junior College quarterback to bring in before the start of this season. 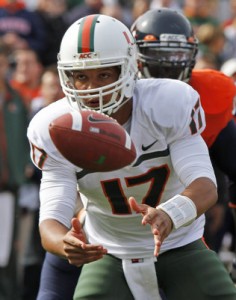 "We tried," Shannon said. "But JUCO kids are hard to find unless they come out of high school already qualified or they transfer like the kid from Auburn [Cam Newton]. He went to Junior College [after Florida] and then came back. Those guys are easy to get back in because they have the credits. They’re just hard to find. Not too many great quarterbacks go to Junior College unless they transfer. It’s hard to find them at that period of time. We were in a tough spot because we were at the end of August when those guys left. We always bring two guys in the same class, but one of them ends up leaving. You can’t keep doing those things. The thing were trying to establish is some stability for the long run."

Just my opinion, but the fact Shannon didn't have a capable backup ready to go last Saturday was inexcusable. Had Stephen Morris been groomed as the backup from the get-go (especially since he came in early and participated in the spring, and Highsmith was going to be redshirted this season anyway), Morris would have been on the field right away once Harris left Saturday's game with a concussion early in the second quarter. Instead, the Canes had to wait through walk-on Spencer Whipple totally tanking it (not surprisingly) before Shannon was forced to burn Morris' redshirt at halftime. In the end, once Morris shook off the nerves, he and the Canes simply ran out of time trying to come back from a 24-0 deficit in a game they should have never lost to begin with.

FYI, Shannon said Morris, who ran the scout team for at least the first five weeks of the season, didn't start getting more reps with the first and second team until three weeks ago when Highsmith first hurt his wrist.

> One thing Shannon did this week -- as his team prepares to play in back-to-back noon starts -- was move practices from 6 a.m. to the mid-afternoons. "Everybody thinks our goal was to keep kids off the streets," Shannon said. "But it's the weather. The hardest thing now -- unlike when I went to school -- is we have thunderstorms now. When I was playing, it was just rain storms. We counted up, we might have missed 12 to 14 days [of practice]. Not in August, I’m talking during the season."

What Shannon means of course is that now -- unlike when he played -- there is more hi-tech lightning detection. Shannon said the school's radius for lightning is three miles wide.

"I’d like to put them under stressful situations, but we haven’t had no heat games until now," Shannon said. "It’s different and it’s hard [practicing in the heat]. When we went in the morning, it was fun, it was easy and you could get a lot of things in."

> The Hurricanes are among the most penalized teams in the country, ranking 118th of out 120 teams (only FIU and Troy State are worse) averaging 9.13 flags a game. But it's not the "aggressive penalties" Shannon says bothers him (he considers holding aggressive). It's the dumb lack of concentration penalties like jumping off sides, false starts and illegal procedures that are eating him up. I went back to the stats and added it up: UM has been flagged 21 times for false starts, 14 times for holding and 13 times for offsides. I'll have more on it in the paper Friday.

> Shannon said he can't put a finger on why the normally reliable Matt Bosher has struggled as much as he has the season (missing 3 extra points), shanking the occassional punt. "It’s just one of those things," Shannon said. "You work on him, work on him and he’s missing extra points. He hadn’t missed that all in his career. It’s just one of those things that happens – like a pitcher in baseball who can’t throw strikes. We work on it at practice everyday when everybody is tired. Last week, he punted the ball well. The week before, he was bad at punting. Last week, he shanked an extra point. That ain’t right."

> Shannon said his defense has been sorely missing senior defensive tackle Josh Holmes. Over the past month, Holmes has missed three of UM's four games with an undisclosed injury. "He really gets those guys going at defensive tackle," Shannon said. "He motivates the guys on the field and he’s the guy were really missing up front – big time. If you watch him on tape, he’s always in the backfield, causing some havoc, allowing a guy to make some plays. And he could play both spots. We’ve missed him a lot."