Monsignor Pace football coach Alvin Slaughter got a call Monday he wasn't expecting. On the other side of the phone was Lamar Thomas.

The former Hurricanes' message to Slaughter: "'The whole program rests on your boys' shoulders," Slaughter said Thomas told him. "I was like 'Oh God, this is more pressure than I need.' " 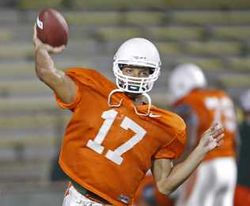 The boy Thomas was referring to was freshman quarterback Stephen Morris, whom Slaughter coached for four seasons at Pace. Barring a miraculous recovery from a concussion by starter Jacory Harris (we should learn how long he'll be out Tuesday), Morris, a 6-2, 185-pound freshman, will make his first collegiate start for the Hurricanes (5-3, 3-2 ACC) Saturday when Maryland (6-2, 3-1) visits Sun Life Stadium for a noon kickoff.

Slaughter plans to be there, where figures he will be more nervous than Morris was in the second half last Saturday when he went from fourth string (and a potential redshirt season) to nearly rallying the Hurricanes from a 24-0 deficit in the fourth quarter at Virginia.

"He called me right after the game and asked me 'How did I look coach? I was like 'Honestly? You looked nervous as hell.'" Slaughter said Monday of his former quarterback, who threw two interceptions, then settled down and led UM to 19 points with two touchdowns passes and a nine-yard TD run in the fourth quarter.

"He asked me, 'Well, What did you expect from me?' I said, 'I expected you to lead this team to victory, nothing less.'

"I actually believe if they would have had another possession that he would have gotten it done. They would have won. I know he's one of my guys. But if you look at the turn of events, the last two possessions he scored touchdowns. You could see he was having success, guys were starting to rally around him. Those guys were smiling, patting him on the head. That was building confidence. Once you get confidence in a player and a football team, you could pretty much do anything."

For Morris, anything could potentially include trying to saving the Hurricanes' season and coach Randy Shannon's job. That's a pretty significant upgrade in role from a week ago when Morris was under the impression he was going to redshirt this season. It wasn't until recently when backup A.J. Highsmith injured his wrist that Slaughter said Morris started working a little bit less with the scout team -- just in case.

"To be honest with you I think he was only getting scout team reps last week," Slaughter said. "So, the only plays he knew were plays he knew from earlier on in the season. Those were the only reps he did -- and the individual reps with coach Whipple they do every week. [Spencer] Whipple and Jacory and Highsmith were getting those other reps. If you put that into the equation, the kid probably played good to great under those circumstances. I mean it was basic stuff they were running for him. It was like they just hoped they executed well and prayed for the best."

"When he gets more reps  this week, I feel more comfortable he can do even better. They just have to limit the play selection and let the guys around him make the plays, not make Stephen Morris win with his big arm. But I don't coach the University of Miami. I'm just saying what I would do."

"I just told him whatever happens you better go back to being humble because that's what always kills football players -- the success and not being able to handle it," Slaughter said. "It's like marrying Halle Berry, Paris Hilton or Kim Kardashian. You wouldn't know how to act.

"I told Stephen, 'You better eat a big piece of that humble pie and lead this football team in the right direction. Because that's what they need, they need a leader.' I don't like throwing stones. I live in a glass house too. I just think he needs to go out there and let the team know he's not going to force anything and let the game come to him. Once he has the support of his teammates, he'll be just fine."

As a junior in 2008, Morris led Pace to the Class 3A state semifinals where they lost on a last-second field goal to eventual state champion Cocoa. In a shotgun-based spread offense, Morris completed 64 percent of his passes for 2,005 yards, 19 touchdowns and nine interceptions. But a year later when his three talented receivers (Sterling Griffin, Kayvon Webster and Derrick Hopkins) left for the University of South Florida, Morris went under center and ran a pro-style offense. Pace didn't have a great season, missing the playoffs for the first time in 18 years. But Morris did well, completing 96 of his 179 passes (53.6 percent) for 1,531 yards, 22 touchdowns and six interceptions. 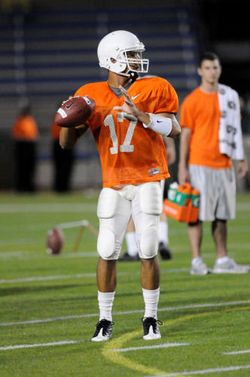 Along the way, he caught the eye of Canes offensive coordinator Mark Whipple, who monitored him closely before hand-picking him to be his future quarterback.

"It pretty much came down Stephen and a kid from California," Slaughter said of UM's recruiting efforts. "I think in the beginning Whipple didn't know Stephen had a big arm. If you saw Stephen throw the long out to Benjamin for the touchdown [Saturday], that's why he's there. When Whipple realized Stephen had a big arm and could throw that 18 to 20-yard out pattern -- something Whipple talked about wanting in his offense -- he absolutely loved him. Plus, when he heard Stephen was a good student with a 4.0 GPA, 1000 on his SAT, was graduating early and could get in the system, all that just made Stephen that even more appealing. Whipple got a kid who was football smart, very intelligent with a high IQ. That's what you want in your quarterback."

And essentially, Slaughter said, what Whipple also liked was that Morris was a quarterback who fit his system. Harris, who went 30-0 as a starter at Miami Northwestern, ran the shotgun spread offense for two years in high school.

Slaughter said Morris has told him he feels comfortable in UM's offense because most of it requires him to be under center, something he did frequently as a senior.

"What Miami does isn't Oregon's offense, four, five wide -- it's not fun on the turf," Slaughter said. "It's playaction, misdirection, use your tight end.

"What Stephen has told me is that Whipple has a lot of different formations, sets and things that he does. But Stephen said one thing that he took from what we did  that has helped him is running the fast pace, hurry-up offense. We did a lot of that from under center. The cadences are similar too. That's helped out a lot, too. Honestly, that's why I go to coaching clinics so I can adjust it and my kids aren't that far behind when they go into college systems."

Slaughter said another reason he believes Morris will be a success under Whipple is his arm strength. Unlike Harris who floats the ball downfield on deep passes, Slaughter said Morris can "throw the ball on a rope 72 yards."

If there is an area Slaughter said Morris might need to work on, it's being more of a vocal leader. But he doesn't necessarily consider that a weakness either.

"He's a lead by example guy," Slaughter said. "When I had him, I would tell him, 'You got to setup the cones, you got to do this or that.' Stephen would do it it at 100 miles per hour. He would be the first one on the field, last one off after practice. He'd tell his receivers, 'Let's go, I need to throw 100 passes, you need to catch 100 passes. Let's do it.' He isn't rah-rah. He's all business.

"The bottomline is he just wants to win. I know when he threw those interceptions, he went to his teammates and said 'Sorry guys, but you can count me. I won't throw another one.' He seeks perfection. He knows those mistakes are terrible and he doesn't accept it."

One way or another, Slaughter believes what Hurricanes fans saw in the fourth quarter last Saturday in Charlottesville was just the beginning for Morris.

"I really believe that they've got themselves the future with Stephen," Slaughter said. "And if not this year, they've finally got themselves a damn good backup. He's a tough kid. Sometimes quarterbacks don't get labeled tough. But they got themselves a tough kid with thick skin. I mean I rip him, lay into him. I've let him have it. I won't share any stories. But I've ripped that boy to shreds and he'll just let it roll off. He's thick skinned. You can coach him hard. As a quarterback, you're going to get it from all angles. You have to take the good and the bad. Stephen can do that."

"Hopefully it works out with the University of Miami. Sometimes, you just need an opportunity, a blessing from the skies and this could be one for The U."