EL PASO -- It's a "special day" at the Sun Bowl -- especially for stadium workers. 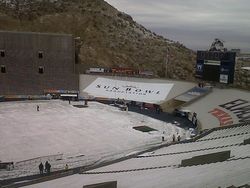 The facility, set to host Miami and Notre Dame in the 77th annual Hyundai Sun Bowl, welcomed visitors Friday morning with an inch of ice and snow.

Brad Thomas, the stadium's field/turf technician for the last nine years, said he expected to have the snow off the field before kickoff at 2 p.m. EST. The game will be televised on CBS.

"It's a special day," Thomas said. "We have a street sweeper here. First time we're using it for snow. I talked to the actual company that installed the turf this morning. They said about an inch, two inches at the most we will be able to take off. We're doing what we have to do to make it work." 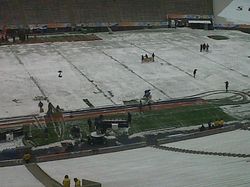 Stadium workers were using long, buffet-type tables and foldable chairs in addition to the sweeper to drag the snow and ice off the turf.

"It's a mixture of ice and snow, mainly snow. It's about an inch thick and it's starting to melt right now," Thomas said about three hours before kickoff. "We're going to start breaking it up and help it melt, before we start sweeping it up with a street sweeper."

Thomas said the field conditions will naturally be a bit slippery during the game.