Soldinger would love shot to go back to The U

At one point during his coaching tenure at the University of Miami, Don Soldinger had an office full of future NFL running backs fighting to carry the ball in the Hurricanes backfield. 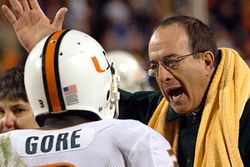 "I got pictures now that if you saw them, you would just shake your head," said Soldinger, who spent 16 years at UM as a linebackers/tight ends coach from 1984 to 1988 and running backs coach/special teams coordinator from 1995 to 2006.

"At one point or another in my office, I had [James] Jackson, EJ [Edgerrin James], [Clinton] Portis, [Jarrett] Payton, [Najeh] Davenport, [Willis] McGahee and Frank [Gore]. I'd love to start another round like that again."

Soldinger, now 66, has spent the last five years since being let go by Larry Coker working as a strength training and speed development coach. He's spent the last two years serving that role at Miami-Dade Community College, training the national championship winning softball team, Steve Hertz's baseball team and most recently the men's and women's basketball teams. He's also traveled the country working special camps and coaching running backs. The bug inside him for coaching at the University of Miami? That remains as strong as ever.

"I hope does enough research just to talk to me," Soldinger said Saturday at the Citrus Bowl as he watched Miami Central play Orlando Dr. Phillips in the Class 6A state championship game. "Whether he comes up to me or not, I think I can help him. I know so many people in the state, still have a little bit of coaching left. The way it all ended wasn't good. I had a great career and I like to finish it off on the right note.

"[Golden] seems to want to want to have some sort of tie to the old players and tradition whereas I think Randy [Shannon] kind of made a mistake that way, turning a few people off that way. I love Randy because I coached him. But I think he kind of pushed some guys away.

"We'll see what happens. I've kept my hands in football in case something happens. I actually did a clinic for Butch [Davis] recently, went up to North Carolina, met with their staff for a few hours. I did a high school clinic for them. He really doesn't have anything there yet. But this is the first time I thought about leaving Miami. I haven't wanted to because my wife does real good in real estate. But if something came open I'd certaily like to help out."

Soldinger said the talent he sees in UM's backfield now "is probably the best group they've had since I've been gone."

"It's similar to the guys I had sitting in my room just a few years ago," Soldinger said. "[Mike] James, [Storm] Johnson, [Lamar] Miller, the kid from Booker T. Washington [Eduardo Clements] those guys all have it. They just need to be patient, stay positive and not worry about who is the man. All of the guys I had before were like that. They didn't like it back then. But they like it now. They're all making a ton of money."