Will D'Onofrio be UM's next d-coordinator?

According to a report by the Philadelphia Sports Daily, Temple defensive coordinator Mark D’Onofrio has turned down Temple's head coaching job and will follow his best friend Al Golden to the University of Miami. According to the report, D’Onofrio is expected to become UM's defensive coordinator under Golden, though the source, who requested anonymity because of the nature of the situation, could not confirm that was the job he would have with the Hurricanes.

D'Onofrio was Al Golden’s teammate at Penn State before becoming an assistant with him at Virginia. After serving as the Owls’ defensive coordinator for two seasons, D’Onofrio was promoted by Golden to assistant head coach/defensive coordinator in the spring of 2008. D'Onofrio, who played professionally with the Green Bay Packers, has 10 seasons of college coaching experience.

As a player, the North Bergen (N.J.) native played at Penn State, where he starred at both inside and outside linebacker from 1988-91. He led the Nittany Lions in sacks (11) as a sophomore and tackles (71) as a junior. As a senior, he was elected captain and finished second in total tackles despite missing six games with an injury. He set the Penn State school record for causing the most fumbles in one season (five) and finished his career ranked in the top 10 in sacks with 15.

Golden said Monday after his introductory press conference he was going to first focus his efforts on recruiting before the dead period (which begins Sunday) and then will turn his attention toward building a staff. If D'Onofrio becomes his coordinator, it would be the least bit surprising considering how close the two are.

CHICKILLO TALKS WITH GOLDEN: With his wife looking for a new home for the family, Al Golden spent his second day in South Florida Tuesday working the phones and calling recruits. 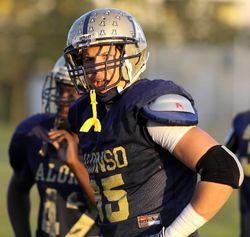 One happy person to receive a phone call late Tuesday night was Tampa Alonso defensive end and Under-Armour All-American Anthony Chickillo, who said he spoke with Golden for 35 to 40 minutes and came away impressed. The first thing Golden told him: "I want to win championships."

"We had a great talk," Chickillo said. "He's a real proud speaker. He was real enthusiastic about the direction he thinks he can take the University of Miami program. He said I'm a No. 1 priority right now, that I'm real important to the recruiting class and he knows about my family history and he says I'm very very important to the program. He wants me to be a Hurricane."

Did the talk change his opinion of Golden? "I never had a bad opinion of him because I never spoke to him," Chickillo said. "He had success at a Temple program that hadn't had a lot of success. Everywhere he's been he's had success. I think he's one of the best up and coming coaches right now. He really surprised me. I have a lot of love for UM. His passion surprised me. I think he's going to do a great job."

Chickillo said Golden wants to meet him and his family and build a relationship as soon as he can finalize his coaching staff. Chickillo said he will still take his other visits, but is planning on visiting UM in January.

On Sunday, Chickillo said he was a little worried about the defensive scheme UM would employ. But that changed after talking to Golden. "He said it's going to be a 4-3," Chickillo said. "You know all teams run different packages and stuff.

"He just said he watched my film and loved it and all the passion and how hard I play. He said guys like me can help the U return to where he wants it to be. He says there are so many great players in the program right now. He said it's not about them, it's not about me, it's not about him, it's about us. He said it's what we can do to bring Miami back to the glory days. I liked that. He seems like he has a little swagger to him."

"Coach Shannon is a great guy, but he kept to himself a little bit more," Chickillo said. "I don't know how to really explain it except that he really didn't like to talk on the phone. You know what I mean? Coach Shannon preferred to talk in person. Coach Golden wanted to talk to me for a long time. He gave me his cell phone number and said to call whatever time it is. I didn't know coach Golden that well, but I can tell you now I like him."

Despite reports to the contrary, Chickillo said he never de-committed from Miami and has just been talking to schools more. "When I told coach I would take all my visits, he understood," Chickillo said.

As for how Golden stacked up against new Florida coach Will Muschamp, who called Chickillo on Sunday: "They are both great coaches. I would say Coach Golden got me a little more pumped. Coach Muschamp had me pumped up too. He's a very enthusiastic speaker too.

"All I know right now is I'm going to take all my trips. After that, I really don't know when I will make a final decision. But I'm still committed to Miami."

"I went over there to hang out like I always do," Chickillo said. "I'm real close with Coach Patrick. Teddy was there on an official. I just said hi to him. He seemed tired and was going back to the hotel."

VIDEO OF D'ONOFRIO AT TEMPLE