It started with a visit from defensive coordinator Mark D'Onofrio on Monday, heated up when Steve Spurrier missed an in-home visit on Wednesday and ended in Al Golden's office Friday morning. 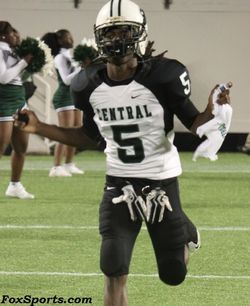 That's the short version of how Miami Central cornerback Thomas Finnie went from being a Gamecock to a Hurricane -- and the first local recruit Golden and his staff were able to sway away from another school since taking over for Randy Shannon.

Finnie (5-10, 170, 4.4-speed) was a three-year starter for the Class 6A state champion Rockets and is considered the 39th best cornerback in the country by Rivals. He grew up dreaming of being a Miami Hurricane. But it wasn't until Friday that it became a reality.

"It's been a big week -- a lot has changed," said Finnie, an early enrollee who was all set to drive up to South Carolina Friday morning before UM got into his recruiting picture earlier this week. "I guess you can say it's pretty special. Everything is going to be good. I'm going to be a Miami Hurricane. I was always a Cane fan, grew up down here. Everybody likes to dream about UM and everything. Now, it's real."

Finnie received initial interest from the Hurricanes at the beginning of his senior season. But then, UM backed off. Finnie then committed to South Carolina and assumed the Hurricanes weren't interested. The plan for Finnie's family was to drive up to South Carolina this weekend. But little by little, Golden and his assistants got UM back into the picture, starting with a visit from D'Onofrio on Monday.

"They really showed themselves, really went after him the way they should recruit a kid," Finnie Sr. said. "Coach Golden told him everything we needed to hear in terms of us parents putting our child in his hands. They actually really showed the program to him and to me and my wife. He did a hell of a job.

"The recruiter from South Carolina did a good job. But we were suppose to meet with Steve Spurrier Wednesday and he never showed. The recruiter told us he had an emergency. But you could kind of see through that. That, he just wasn't going to come to that. That kind of took the air out of my son. When you get to meet the head coach, that means a lot to a kid, shows that you really want him. That took the air out of him. My wife wanted to meet him for him to know that 'I'm going to put my son in your hands.'

"But Golden went all out man. I'm talking about since yesterday and he had one day to do it. I told him my son is leaving in the morning. He asked for an opportunity to do it, to talk with us and everything. And he went at it. He was in Tampa with [Anthony] Chickillo. He said 'I'll come straight to your house when I leave there.' But I knew it was going to be at 2 or 3 in the morning. So we setup a meeting at 6 a.m. Everything he told my son starting yesterday, that made my son say he'll commit to UM."

Finnie, a former assistant coach at Miami Northwestern, said Golden and his staff really impressed him and just kept asking for an opportunity.

"The new coaching staff apologized for what happened, 'Saying we didn't have the opportunity to recruit, come after your son. Now, we're doing what we have to do to.' And I mean, in two days man, not even a whole day everything changed," Finnie Sr. said. "[Golden] really put pressure on us. He came at us. He was unreal. He was like: 'Sir I apologize for the old staff. We have a whole new staff. We evaluated your son, watched the state championship game and we were very impressed. We really like what we saw in him. And we want him, we want him bad. Whatever it is, I'm going to do everything I have to do to get him.'

"He impressed me and my wife. He showed I want him. They always said he was a heck of a recruiter. He can go get 'em and he showed he could do it. He went after him. He didn't let me say no. We tried everything. We said when we give our word, we stand behind it. He said 'I understand that. But give me an opporunity.' And he went from there.

"He told us everything a coach should tell a parent as far as getting their kid. South Carolina did it too. But we only got a chance to talk to the recruiter. [UM's] defensive coordinator, Michael Barrow, quite a few of the coaches contacted us about him. They said they evaluated him and that he has an opportunity to come in and play right now. They put it on the table. When they do it like that, it's hard to say no. Plus, he's staying home."

Finnie said he hopes to come in and compete right away for a starting job. The Hurricanes have only five cornerbacks on their current roster for 2011: redshirt sophomore Brandon McGee, junior and former running back Lee Chambers and three redshirt freshmen.

"There's no better place than home," Finnie said. "With Brandon Harris and all the cornerbacks left, there's a lot of opportunity. They got new coaches, a new playbook. The U is going to be back soon. And I want to be a part of it."