« Mom says 'it's not over yet', but Brissett does | Main | UM releases spring football schedule »

Brissett signs with UF; Canes focus on other QBs 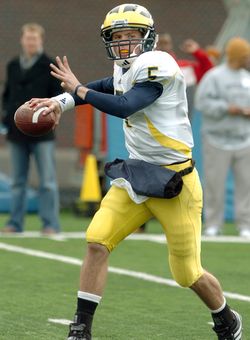 Three days after announcing at a basketball he wanted to play for the Gators, the U.S. Army All-American quarterback faxed his signed National Letter of Intent to Gainesville on Monday despite the efforts of his mother to sway him back toward the Canes.

Brissett (6-5, 225) was the top remaining unsigned quarterback in the country and said on Friday that he narrowed his choices down to UM and UF. But he chose to follow his heart -- and three former Dwyer teammates -- to Gainesville, against his mother's wishes.

Former Michigan standout Tate Forcier and Rutgers freshman All-American Tom Savage remain transfer possibilities for the Hurricanes at quarterback. Both would have to sit out the 2011 season if they picked UM per NCAA transfer rules. Forcier is reportedly going to visit UM sometime this week.

> As the Canes look for a quarterback of the future, here is an interesting read from Rivals about Super Bowl MVP Aaron Rodgers, who had zero offers coming out of high school.

> The Hurricanes could end up adding another defensive tackle to their 2011 signing class sometime this week. According to InsideTheU.com, Bradenton Manatee senior Quinton Pompey (6-3, 275) still remains unsigned and is waiting on Miami according to his high school coach. Pompey's other offers are from Georgia Southern and Eastern Kentucky. Pompey was lightly recruited because of academic struggles, but has apparently worked them out according to his coach.

The bigger concern? Sophomore center Reggie Johnson, who continues to battle issues with his right foot. Johnson, averaging 12 points and 9.9 rebounds a game (third most in the ACC), had bone spurs in his foot earlier this season. He played a season-high 34 minutes in Saturday's overtime win over Virginia.

"He has a reaction in his foot," Haith said during Monday's ACC teleconference. "We got to see that goes. He didn't practice Friday and I think he's going to be tabled at practice. We'll wait to see what the doctors say today."

> Looks like another former Hurricanes assistant has landed at Alabama. Joe Pannunzio, who coached the special teams and tight ends under Shannon the last four years, has reportedly been hired in an "off the field role" by Nick Saban. Alabama hired former offensive line coach Jeff Stoutland last month.

> Just a reminder: the Hurricanes baseball team will have its team banquet Friday night at 6 p.m. and Fan Fest Saturday at 3 p.m. Jim Morris' team opens its season at home a week from Friday (Feb. 18) against Rutgers.

> Also, in case you missed Jorge Milian's blog from last week, UM is in talks with Florida State about scheduling next season's game as the season-opener on Labor Day. It's still not finalized.