Previewing Signing Day for the Canes

WIth less than 24 hours before National Signing Day, the Miami Hurricanes are at 15 commitments (two players have already enrolled) as part of their 2011 signing class.

So what will transpire when fax machines start spitting out signed National Letters of Intent on Wednesday? Nobody is really sure. But I caught up with Canesport.com's Matt Shodell, who has covered UM recruiting since the 18th century, to get the latest in what turned out to be a half-hour podcast. If you love recruiting or don't know anything about it, Matt did a great job breaking things down position by position with me. Not only did he review the players UM already has committed, but he gave us some quality info on who they might add and are considering.

If you don't care to listen, here is an abbreviated/written version of what Matt and I talked about (FYI, National Signing Day is just the start of the signing period. Players have until April 1st to sign with schools): 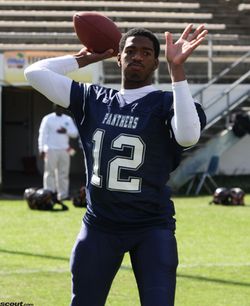 > At quarterback, the Hurricanes don't have any commitments yet, but are obviously hot on the trail of Palm Beach Dwyer's Jacoby Brissett (who may end up waiting until halftime of his basketball game Friday to announce his choice between UM, Wisconsin and Florida). Former Rutgers quarterback Tom Savage remains an option as a transfer. Matt thinks if UM doesn't end up with Brissett or Savage, UM could end up offering Steve Weatherford (committed to Cincinnati) or end up with another option.

> At running back, UM has only one commitment in South Broward's Kevin Grooms and they are fine with it -- especially with 2012 standout Duke Johnson of Miami Norland already committed. Grooms could end up switching to cornerback, an area where UM may not end up signing enough players in this class.

> At receiver, an obvious area of need, the commitments remain St. Thomas Aquinas' Phillip Dorsett and Melbourne Central Catholic's Rashawn Scott. The Canes could end up adding California's Devin Lucien (he will announce at 6 p.m. EST Wednesday) or Patrick Onwaussor (6 p.m. EST Wednesday). But Matt thinks the fact those kids didn't commit on their visits probably hurts UM. Former Aquinas and Ohio State Duron Carter, the son of ESPN analyst Cris Carter, who is attending Palm Beach Community College, also remains an option if he can get his academics in order.

> At tight end, UM already has USC transfer Blake Ayles on campus. Barring a major surprise, he will be the only tight end in this class. Northeast defensive end Bryant Dubose, one of UM's commitments, could end up switching to tight end. He could also end up not being a part of this class at all. Matt said Dubose could be having second thoughts with heavy pressure from Syracuse and Louisville.

> On the offensive line, the Hurricanes have big Taylor Gadbois (6-8, 295), a player Matt compares favorably with former Canes offensive tackle Jason Fox. The Hurricanes are expected to land two players on the offensive line -- Jacksonville Ed White's Kaleb Johnson (6-5, 280) will likely be the other. Matt said Johnson (will announce at 9 a.m. Wednesday) hit it off with Art Kehoe during his in-home visit last week. Johnson is also considering North Carolina, where a family member is currently employed. 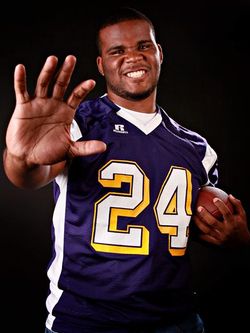 > On the defensive line, the Canes have four commitments -- all at defensive end. We told you about Dubose, the others are Tampa Alonso and Under Armour All-American Anthony Chickillo, Fork Union Military Academy (Va.)'s Olsen Pierre (a former Temple commitment already enrolled) and Homestead's Ricardo Williams.

If the Canes add any linemen at this point it will be defensive tackles. UM's best shot according to Matt is Lake Butler Union County's Lonnie Gosha (an Arkansas commitment and ESPN Top150 player). Gosha will announce at 12:15 p.m. at his high school. Las Vegas Bishop Gorman's Jalen Grimble, who was a USC commitment, could also be a big surprise addition. He will decide between UM and UCLA (5 p.m. Wednesday). The Hurricanes are also still after Miami Booker T. Washington's Elkino Watson (9 a.m. Wednesday). But we both think Watson will end up going elsewhere. The Hurricanes have invited a couple recruits to hold off on making a decision and taking a possible visit -- Bradenton Manatee's Quinton Pompey being one of them.

> In the secondary, UM took a bit of hit late Monday night when Los Angeles-area JUCO cornerback Byron Moore opted for Tennessee instead of the Canes. Matt said UM was expecting to land Moore, but it didn't happen. As it stands, the Canes have two commitments -- Miami Central cornerback Thomas Finnie (who is already enrolled) and South Fort Myers' Dallas Crawford. California's Marqise Lee visited UM, but is expected to remain on the West Coast. Virginia's Dominique Terrell (11:15 a.m. Wednesday) remains a possiblity after his visit, but isn't likely. But who knows, there might be another late surprise.

> On special teams, the Canes have landed two highly regarded prospects in kicker Matt Goudis and punter Dalton Botts. Both should do a good job replacing the departed Matt Bosher.