CORAL GABLES -- The University of Miami women's basketball team enjoyed a glorious turnaround from worst to first in the ACC this season. And that turnaround just got a little sweeter. 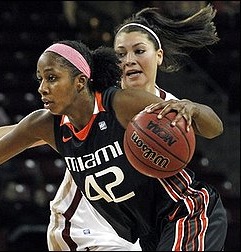 Johnson, a two-time All-ACC First Team selection, was the only player in the ACC to rank in the Top 10 in scoring (second, 19.6 ppg), rebounding (eighth, 7.8 rpg) and assists (ninth, 3.7 apg). Johnson, who had a league-high three 30-point performances and 11 20-point showings while being named the ACC Player of the Week on three occasions this season, was also named to the 2010-11 All-Defensive team. She is one of UM players to average more than three steals per game and owns an impressive 86 percent free throw accuracy. In addition, Johnson has found time to lead her team in blocks, registering 26 in 29 games played.

After leading her team an appearance to last year's NIT championship game, Meier guided the Canes to a 26-3 overall record and a 12-2 ACC mark, tying with Duke as regular season champions. The regular season title is the first for the Miami program and the No. 2 seed in the 2011 ACC Women's Basketball Tournament is the team's highest seed in school history since joining the league in 2004-05. Meier, who is in her sixth season at UM, is just two victories away from earning her 100th win at UM and would become just the third coach in program history to reach the milestone. 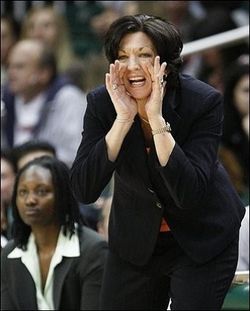 "Obviously I'm thrilled with the progress that we made this year," Meier said Tuesday. "The regular season was so much fun. I just love the ACC coaches and the games and the arenas and the crowds. It' been kind of a magical little run for us."

UM opens the ACC Tournament on Friday at 6 p.m. against the winner Thursday's first round game between Boston College and N.C. State.

"I really want to see us play free, confidently, passionately like we've been playing all year," Meier said. "It's been a unique chemistry, a unique energy about the team. That's a very hard thing to bottle up. It's a hard thing to make sure you know is there. That's where I'll be challenging them. I'll be pretty energetic and passionate in practice this week before we get up there making sure that it's consistent, it's there."