Hurricanes linebacker Ramon Buchanan has entered a pre-trial diversion program to clear him of the felony charges he was facing following an incident with police last month at a Coconut Grove nightclub. 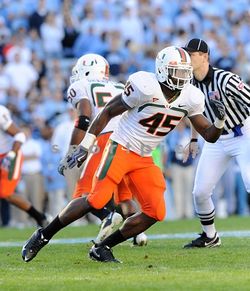 Joseph Rosenbaum, Buchanan's attorney, said the 21-year old University of Miami junior must complete 100 hours of community service, write letters of apology to two officers and donate $300 to charities under an agreement reached with the state attorney's office. Once he completes the program, his record will be cleared.

"He's a good kid who had a bad day. Officers agreed," Rosenbaum said. "He's already apologized to the officers involved. He personally sought them out and apologized, wrote them letters and was very remorseful. He's thankful he was able to resolve the case in this matter. Many cases are resolved this way as well. This was not unusual. This is how these cases are resolved if you have no priors."

Buchanan, who was reinstated by coach Al Golden two weeks after the incident, did not appear in court Monday. Rosenbaum said Buchanan has already started serving his community service hours at the City of Miami Police Department.

Miami-Dade Circuit Court Judge Jorge Rodriguez-Chomat warned Buchanan through his attorney on Monday that "instances like this could blow your career."

Buchanan, from Palm Bay, Fla., played in all 13 games last season, starting 10, and was fifth on the team with 54 tackles, including eight for losses. He also had an interception. He's expected to start for the Hurricanes at outside linebacker next season.

"It's a growing thing, it's life," Rosenbaum said. "I see it everyday. I see good people who have miscommunication with police. And it escalates and you're not going to win."