Buchanan is back; Jacory and Stephen neck-and-neck.

As I'm sure you know by now, UM linebacker Ramon Buchanan is back. He was reinstated to the team by Coach Al Golden.

Here's the story about Buchanan 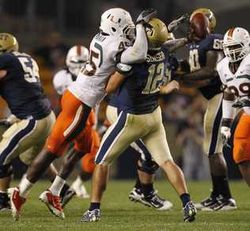 It seems strange that he's been reinstated before the court date, but chances are Ramon will be put into a pretrial diversion program and the charges will eventually be dropped if he completes it.

Do you think Buchanan should be suspended for any games, regardless of what happens in court? Just wondering.

Golden told us today that the quarterback competition between Jacory Harris and Stephen Morris is "awfully tight right now, and I don't know if there will be a resolution in the next nine or 10 days. It's more likely going to be August.''

Golden said they were both "leading by example,'' and that he wants them both to be more vocal.

They'll be evaluated very closely during the next two scrimmages, but I doubt he names a starter until fall.