This much seems certain early on in the Al Golden era: he's not going to settle for his players giving just what they think is enough to get by. No way. He wants passion, he wants energy, he wants that extra intensity -- and work -- that turn a good player into a great one.

It's impressive how he has no qualms about changing the depth chart on a regular basis, based on how he feels players performed, not on how they should perform according to their star power.

"One of the things I told the coaches on Sunday when I came in and watched the whole [scrimmage film], is I want the depth chart to reflect performance, not potential,'' Golden told us before practice Tuesday. "A lot of coaches get fired waiting for someone with potential to develop. I want it based on performance. That's our depth chart, and clearly there's battles within that depth chart that we see every day here.''

It must feel good to know that even if you aren't considered a big name, you are being treated equally -- or better -- if you perform equally or better. That said, Golden complained about UM's conditioning level at this time. He said his players are in better condition than they were previously, but not good enough.

"That's a challenge for the team this week -- can we prepare, can we play with Miami toughness and will we start to play with energy and passion? That's really the challenge leaving that field at noon and being on Traz Powell [Stadium for the next scrimmage] at 10 O'Clock Saturday."

Golden said his team didn't play with the type of tempo he wanted at last week's scrimmage at Spanish River High. He said they were in "too much of a survival mode.''

I asked him to explain.

Golden was pleased "that there weren't a lot of operational mishaps'' last weekend. "We didn't have a lot of fumbled snaps, not a lot of delay of games, not a lot of penalties. All that was good. That's part of being a little bit more disciplined.''

Some changes on the new depth chart, based on the coaches'  observations from last Saturday's scrimmage: 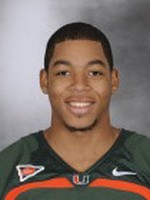 * Linebacker Jordan Futch, who was listed as the backup to outside starter Sean Spence last week, was elevated to co-starter with Jimmy Gaines in the middle on the new depth chart released Tuesday. Golden said he really was impressed with Futch, in person and on film.

"Sweet Jesus,'' Futch said to me when I told him he had been elevated to first-teamer. (You've got to love Jordan -- great kid, great heart. He's got the passion for sure, and he can hit.)

* Mike James, who shared first-team honors with Storm Johnson and Lamar Miller, is now all by himself on top -- followed by Miller and Johnson.

* Five tight ends are listed in alphabetical order because they're all neck-and-neck.

* Adewale Ojomo, who had a great scrimmage, is back at the starting spot at right defensive end.

* Olsen Pierre was listed at defensive end last week and is now at tackle as a co-first-teamer with Luther Robinson.

* Thomas Finnie is now listed as third-team corner, behind starter Brandon McGee and No. 2 Lee Chambers.

IF YOU WANT TO COMPARE THE ABOVE TO THE PREVIOUS DEPTH CHART RELEASED ON MARCH 31...