Canes looking to shut door on FSU this time

You don't have to remind Danny Miranda how much losing last year's series at Florida State hurt the Hurricanes. 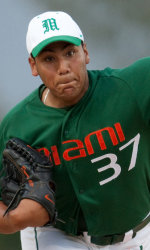 He was on the mound for the first of two ninth-inning rallies the Seminoles pulled off on back-to-back days to beat UM. Trailing by one in the bottom of the ninth, FSU loaded the bases with no outs on a single, a walk and an error before Stuart Tapley hit a double to straight-away center off Miranda to bring in the game-tying and game-winning runs. The Canes led 7-3 before FSU scored five runs over the final two innings.

The next day, Mike McGee hit a two-out, two-run home run off Taylor Wulf in the ninth to rally the Seminoles to a 7-6 win.

"It felt like we were ahead 25 of the 27 innings we played," Miranda lamented earlier this week. "It was tough. All I know is we can't wait to play them again, here, in our place."

UM, which has won 14 of 16 to climb to 28-13 and as high as No. 14 in some polls, gets it shot at revenge starting Friday night at Alex Rodriguez Park. FSU junior lefty Sean Gilmartin (7-1, 1.38 ERA), who is coming off a 13-strikeout complete-game performance against Duke, will face freshman left-hander Brad Radziewski (6-2, 3.23 ERA) in the series opener.

The ninth-ranked Seminoles (31-10) are one of the top run-scoring teams in the nation, scoring an average of 7.8 times per game (ninth in the nation). FSU also leads D-I teams in doubles (106) and base on balls (272). The Hurricanes’ strength is their pitching – they entered the week ranked eighth nationally in strikeouts per nine innings (8.9) and ninth in hits allowed per nine innings (7.34).

This time, if Miranda (3-1, 3.33 ERA) gets a lead handed to him he feels more confident he'll be able to maintain it. The junior left-hander, who had just five saves last season, has 11 in 12 chances already (second most in the ACC). The reason for improvement? He's developed enough confidence in a slider to throw it against lefties, something he couldn't really do a year ago.

"I had it last year, but it was inconsistent," Miranda said. "It’s gotten a lot better, helped gotten me out of a lot of situations against lefties. Before whenever I faced lefties I would just go fastball. I couldn’t throw a changeup to a lefty, it would go in on them. [UM coach Jim Morris] always pushed me to develop a third pitch to make me more effective. I was fastball-changeup all through last year. It helps me with righties. But against lefties, it was all fastball. Once I developed that slider, it throws them off. It’s helped me out a lot." 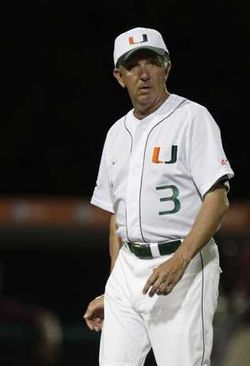 > For all of those who wanted Jim Morris out after his team's 4-7 start, chew on this: Since the 61-year old skipper's return from gall bladder surgery and its complications (officially March 8), UM's struggling bats have gone from hitting .229 to .277.

Lead-off hitter Zeke DeVoss said Morris calmed he and his teammates down and got them to focus on what they needed to do after being frustrated by the little success they were having with their new wood-like bats.

"We had a team meeting a couple days after I got out of the hospital and I told them they needed to relax and start swinging, getting their hacks in, don’t get cheated," Morris said.

"I felt like we were too defensive as a team in the way we were swinging the bat. We were trying to execute, feeling for it, not relaxing, particularly in 2-1, 3-1 counts we weren’t getting our hacks in. If you're out in front, that’s fine. I don’t care. If there was a fastball, step into it and drive it. I think once that started happening, we were fine. I think that helped with the pitching too. Now they were going out and not thinking about I got to shut them out every time. It was just kind of a team thing. We played better after that. We still got a huge month left in the season before the ACC Tournament."

> Speaking of Martinez, it's amazing how he's gone from hitting an ACC-leading 21 homers a year ago to hitting just three entering this weekend's series against the Noles. But before anybody jumps on him, realize UM has hit just 23 homers to date. Last year, they slugged 106 as a team.

Give Martinez credit for finding other ways to help his team. He leads the Canes with nine sacrifice hits and has nine multi-RBI games. He's also currently on a 10-game hitting streak.

> Morris isn't complaining about the lack of home run production. He likes low-scoring baseball and games that have to be won with steals and sacrifice bunts (UM leads the ACC in both). He just wishes the new bats being made "were equal."

"If every bat was the exactly the same, then it would come to players and execution," Morris said. "But it's not."

> Morris believes his team is in a strong position to host a regional if it wins this series against the Seminoles.

As it stands, Baseball America projects UM as the first "bubble team out" when it comes to hosting a regional because UM is still fifth in the pecking order among ACC hosting candidates. According to Baseball America, though UM has the head-to-head edge over UNC, it is still just 7-8 against the top 50, compared with UNC's 10-6 mark. Should UM win its series against Florida State this weekend, it will pass the idle Tar Heels, however.

Still, Baseball America says, Stetson (No. 25) could have a better chance to earn the Sunshine State's third regional site, because the committee has shown a preference for putting regionals in new places when mid-majors have put together strong seasons. The RPI might wind up causing Stetson to be a No. 2 seed (though its 8-3 mark against the top 50 and 15-4 record against the top 100 both trump Miami's 7-8 and 16-11 marks), but it could still host as a No. 2, potentially with UM as the No. 1.