« Buchanan is back; Jacory and Stephen neck-and-neck. | Main | Scrimmage #2: Street steppin' out and looking good; Futch is "old school" Cane »

The countdown is on for Scrimmage #2, this one at 10 a.m. Saturday, April 9, at the north campus of Miami-Dade College. Parking opens at 8 a.m. and the gates open at 8:30. Traz Powell Stadium is at 11380 NW 27th Ave. The scrimmage is free and open to the public. Bring your sunscreen!

Guarantee you that the defense is going to be pumped for this one, as head coach Al Golden and defensive coordinator Mark D'Onofrio made it clear this week that players weren't as well-conditioned as they would have liked, and, basically, weren't playing with the fire and emotion they want.

"We're not playing with the toughness we need, both mental and physical toughness,'' Golden said. "We have to get more ownership from the units and particular positions.''

Golden was asked Thursday if he were comfortable with the defensive tackle position, and he said, "I'm not comfortable yet. We need more guys to step up there. We don't have quite the depth we need at that position, which is obviously a glaring issue... Clearly there's an opportunity for guys to step up."

The depth chart lists DTs Luther Robinson or Olsen Pierre at first team on one side and Micanor Regis (followed by Curtis Porter) on the other side.

Quarterbacks, who will presumably wear all white again Saturday, are absolutely off limits. But you can bet that those linebackers and linemen (and DBs, for that matter) will be looking for a sack -- and to stop the running game that decimated the defense last Saturday at the Spanish River High scrimmage.

This week I asked linebacker Jordan Futch the most fun part of scrimmages. "Making tackles and sacks,'' he said.

I then asked him "How weird is it not being able to touch the quarterback?''

Futch: "Oh, it sort of sucks. It sucks more for them than for me, because they can't get touched now, and then they get hit in the game and it's a shocker for them. But it's OK, because it's our natural instinct to just knock the quarterback out.''

Translation: Good thing, actually, that we can't touch the quarterback.

Golden said Thursday that the Canes will probably mix in more deep passes at the Traz Powell scrimmage, "but a lot of it will be dictated by what Coach D'Onofrio calls. I'm more concerned about the decision-making process -- and are they distributing the ball accordingly?" 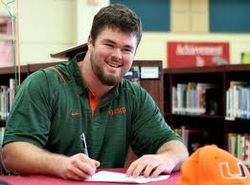 I asked center Shane McDermott if it would be a little bit tougher Saturday protecting the quarterbacks, since the defense is motivated to do better.

I asked guard Brandon Washington the same thing. "The defense feels like they didn't win last week's scrimmage,'' he said, "so I know they're going to come out harder. That means we're going to have to play even harder than we did last week.'' 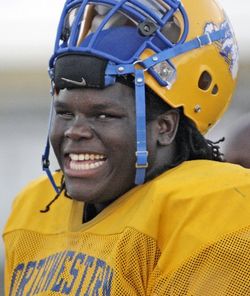 Here's a nice photo of Brandon when he played at Miami Northwestern High.

NOTE: Condolences are in order for Brandon Washington, another standup guy, who said his grandmother died a week and a half ago. Our thoughts and prayers go out to Brandon and his family.