After getting to spend a few wonderful weeks at home with my wife and our first child, I got the chance to escape the house -- and diaper duty -- for a few hours Saturday to catch the Canes Spring Game at Lockhart Stadium in Fort Lauderdale.

Here are a few thoughts and observations (FYI, Saturday's game will be broadcast on CSS at 5 p.m. Sunday in case you weren't there): 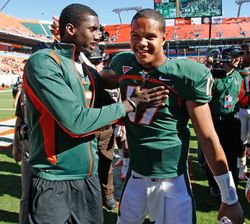 > No Canes assistant has a tougher job ahead of them this summer than offensive coordinator Jedd Fisch. I hate to start with the stinky stuff, but it was painfully obvious Saturday that Jacory Harris and Stephen Morris still have a long way to go. Now it's true that the Canes were short on receivers (LaRon Byrd, Aldarius Johnson, Asante Cleveland, Travis Benjamin weren't out there). But with a vanilla offense (Al Golden said there were just seven pass plays used) and an inexperienced secondary, Harris and Morris shouldn't have looked that bad. Both threw two interceptions each (Morris' pick to Sean Spence, which was returned for a TD, was horrendous). But I was more troubled by the poor choices they made with the football, holding onto it for too long at times and just not finding open receivers. Fisch not only has to find a way to get Morris and Harris to protect the football better, but also see the entire field and check down to their running backs and tight ends more often (he kept screaming for that throughout the game). Unless Harris and Morris get it right, 2011 could still end up looking and feeling a lot like last year -- regardless of how much UM improves in other spots.

> Lamar Miller appears ready to hit another gear. Remember when the Canes had Clinton Portis, Willis McGahee and Frank Gore? Lamar Miller, Mike James and Storm Johnson could end up being just as potent a trifecta. All three continued to impress Saturday even though it was Miller who was Saturday's star with three touchdowns and 166 yards on just 10 carries. The question moving forward becomes how Fisch utilizes all three and splits carries and touches. Last season, Miller carried the ball more than 11 times only twice (he had 22 carries for 125 yards and a touchdown versus Maryland and 15 carries for 163 yards and one touchdown versus Virginia Tech). James hit double digits in carries three times (no more than 11). And Storm carried it only nine times all season (for 119 yards, most on a 71-yard TD run versus USF). Personally, I'd make Storm and Miller the primary ball carriers (both are more explosive than James) and use James (13 catches in '10) as the primary pass catcher out of the backfield and the specialist in short yardage situations. And, I would make sure to get the ball into the trios hands one way or the other 75 to 80 percent of the time on offense. 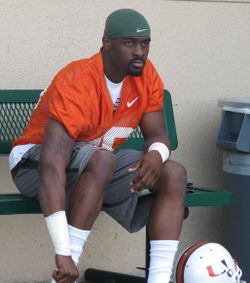 > Moving JoJo Nicolas to cornerback was smart. At first I kind of balked at the idea of seeing Nicolas, a rather average safety, move to cornerback. But Al Golden and his staff obviously saw something most of us hadn't yet in the 6-1, 200-pound senior from Homestead. Nicolas made a couple nice plays in coverage Saturday including batting away a perfectly thrown pass by Harris to Tommy Streeter. Now, I'm not saying Nicolas is going to be able to come in and provide what Brandon Harris did last season. But he could prove to be just as effective as say Ryan Hill was. And that's something this young, inexperienced secondary could use. Brandon McGee, Thomas Finnie and walk-on Andrew Swasey (who appears headed for big things with this team one way or the other) all had picks Saturday. The talent is there, but it feels like the secondary still has a long way to go in terms of development.

> It's time for Tommy Streeter and Kendal Thompkins to really contribute. We heard all about the talents of the former Miami Northwestern receivers before they got to UM. Then, we heard about how great they looked in practice. We've seen glimpses here and there in a handful of games. But after three years, isn't time we stopped hearing and started seeing real results from these guys? Despite reportedly making strides all spring, Streeter had a rough afternoon Saturday. He didn't show enough of a fight for the football on a couple balls he could have had including one in the end zone Swasey (who is seven inches shorter than him) took away from him. Thompkins had a team-high seven catches for 81 yards and made a nice grab near the sideline on a 23-yard touchdown pass from Morris. But we've seen Thompkins do this before in games that don't count. It's time he does it when it matters, especially in the slot where the Canes need help.

> Clive Walford looks like he will be able to help out at tight end. UM's best tight end, Asante Cleveland, missed this spring due to injury. But that gave others a chance to shine. Sounds and feels like Walford was the only one who really took advantage. He had four catches for 48 yards Saturday and looked comfortable blocking. USC transfer Blake Ayles and senior Chase Ford were invisible. Walford said afterward he's got about 90 percent of the playbook down and definitely feels like he will contribute this coming season because "I feel comfortable with blocking." That's great news for the Canes who could use two solid options at tight end.

> Loved the big hits delivered by safety Ray Ray Armstrong Saturday including one in which he knocked the helmet clean off running back Darion Hall. Armstrong appears as though he's ready to turn the corner.

> I'm not as worried about the middle linebacker spot as I thought I was going to be with Colin McCarthy moving on. Kelvin Cain, Jordan Futch and Jimmy Gaines all appear as though they are headed in the right direction. My guess is Futch will probably earn the starting job in the fall with Cain pushing him hard for playing time.

> Just wanted to give some kudos to Susan Miller Degnan for doing a great job with the blog while I was out. SMD is old school, but she's coming around to enjoying this blogging deal. I think we make a great team. By the way, she needs more Twitter followers. Jump on board @smillerdegnan