There will be one less breakaway running back in the Hurricanes backfield next season. 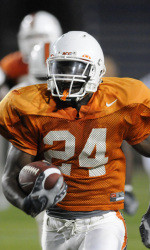 Westleigh "Storm" Johnson, coming off a freshman season in which he carried the ball just nine times for 119 yards, but showed a lot of promise with his 71-yard touchdown run in the regular season finale against South Florida, informed coach Al Golden Tuesday afternoon he would like to transfer.

“As of this afternoon, Westleigh Storm Johnson is no longer a part of the University of Miami Football program," UM coach Al Golden said in a statement released through the school Tuesday night.

"When these situations arise, we always assist the student-athlete and his family in the transfer process. We wish Storm success in all future endeavors.”

Johnson's father, Wes, said his son had spoken to Golden "multiple times" about leaving since he took over as coach.

"He wanted to be closer to home. He's a mama's boy and the backfield is crowded," Johnson Sr. said. "Life is full of surprises. We're not broken up. It's his life. Sometimes you have to make hard decisions."

Johnson, who finished this spring as the team's No. 3 running back, was one of six players reportedly suspended for the season opener against Maryland – a report coach Al Golden would neither confirm nor deny during spring practice.

Johnson (6-0, 216) also was reportedly involved in an April 27 incident at a UM residential hall for which school police were called to the scene.

Johnson Sr. said he had been told his son he was "not suspended" and that none of that played into his son's decision.

"He's coming home, going to relax, get into a workout regime and he'll decide within then next couple weeks what he's going to do," Westleigh Sr. said. "There's nothing else that needs to be said."

Johnson is the fifth player to seek transfer out of UM since the end of the spring. Earlier this month, UM announced linebackers Travis Williams and Kevin Nelson and defensive backs Jamal Reid and Devont'a Davis were no longer with the program. Defensive lineman Jeffrey Brown, arrested on sexual battery charges, was suspended indefinitely from the team.

> So who becomes the backup if Lamar Miller or Mike James twists an ankle? That would be redshirt freshman Darion Hall. Here's a nice story on Hall by his hometown newspaper The Naples Daily News from the spring.

The Canes could also given incoming freshman Kevin Grooms a shot. He was a standout at South Broward High the past two seasons. Or, they could move redshirt sophomore Eduardo Clements back from cornerback. UM has one of the nation's top tailbacks committed in its 2012 class, Miami Norland's Duke Johnson.

> In other UM news from Tuesday, the Hurricanes received a commitment from 2012 linebacker Raphael Kirby. The 6-1, 215-pound prospect from Stephenson High in Georgia picked UM over Florida, LSU, North Carolina and South Carolina.

These commitments of course are non-binding until they sign a National Letter of Intent in February. Kirby has teammates headed to Florida and it wouldn't be a surprise if in the wacky world of recruiting he pulls a "late surprising switch."

> The Hurricanes men's basketball team will play at Purdue in the ACC/Big Ten Challenge on Nov. 29. The rest of UM's 2011-12 schedule has yet to be released.