Harold Martinez didn't have the type of season many expected him to -- even himself. 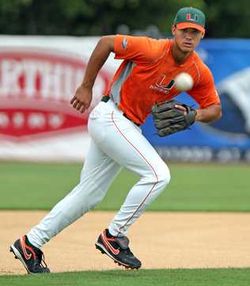 After leading the ACC in home runs with 21 as a sophomore and leading the Canes with 69 RBI, he hit just three home runs and drove in 38 runs as a junior. It wasn't the kind of output scouts were hoping to see -- regardless of the new aluminum bats being used in college baseball.

But early Tuesday afternoon, as he sat in his house and followed the draft online, his biggest dream came true. With the last pick in the second round, 90th overall, the Philadelphia Phillies took Martinez. And after living out one dream for the last three years at Miami, Martinez is almost certain he's ready to go pro.

"There’s a lot left [at UM], but I’m pretty sure I’m going to go ahead and take this opportunity," said Martinez, who spoke with Miami Herald reporter Adam Beasley. "I had two dreams in my life, UM and play in the major leagues. I’ve already achieved one of those goals. It’s time to chase the other."

Martinez's agent/advisor, Mike Maulini, said he's never had to work harder for one of his players than he had to with Martinez. Convincing teams his rough junior season at UM was simply a hiccup on the way to a great career wasn't an easy sell.

"In my 13 years of being an agent this is on top of the list as far as working hard for a player," Maulini said. "He is an amazing young man and I am extremely happy for him and his family."

Martinez said he has a lot to improve on moving forward. But he's looking forward to it. "I knew I was going to get drafted no matter what, and I’d have chance to chase my dream," Martinez said. "You're always scared you’re not going to go real high because I didn’t have the year I thought I would. But I love baseball and I knew I’d be drafted by someone."

Teammate Zeke DeVoss didn't go long after Martinez. He was taken eight picks later by the Chicago Cubs, 98th overall and early in the third round. DeVoss, who led UM with a .340 batting average and the ACC with 32 stolen bases, was a little surprised he went so early.

"“I was actually at home [in Miami], laying in bed," DeVoss said. "I wasn’t really expecting it. I had the draft on my computer and heard my name. It is a tremendous blessing. To get drafted by such a great club like the Chicago Cubs, I’m really excited.”

DeVoss is only a sophomore, but because his 21st birthday on July 17 falls before the signing cut-off he was eligible for this year's draft. So will he also be leaving UM behind?

"The Cubs are going to be calling back in the next couple of days to discuss things," DeVoss said. "I don’t intend on having it be something that lasts all summer. I’ll decide in the next week or two. At this point, it’s really 50-50. I would like to sign, but I wouldn’t have any problem with coming back next year. This is a great place. It’s great to play under Coach Morris. To get a degree from UM, I’m sure anybody in the world would love to do that."

The Cardinals plucked junior left-handed closer Danny Miranda with the 260th pick in the eight round. Miranda went 3-1 with a 2.67 ERA and 15 saves this past season.

Two UM signees were taken on the first day of the draft -- and likely will end up going pro.

Left-handed pitcher Henry Owens, a lanky 6-foot-7 hurler from one Edison High School in Huntington Beach, Calif., was taken 36th overall -- third in the compensatory round -- by the Boston Red Sox.

On Tuesday, Miami Columbus pitcher Andy Suarez, a left-hander who also signed with UM, was taken in the ninth round by the Blue Jays, 289th overall. Maulini, who serves as Suarez's advisor, said he expects the Blue Jays to make a hard run at signing Suarez.